Today is the feast of St. Maruthas, Bishop of Martyropolis (modern day Silvan in southeast Turkey) which sat between the Persian and Byzantine Empires. He is a Confessor because he suffered under the Persian Emperor Sapor, but was instrumental in negotiating peace between the two Empires during the reigns of Theodosius the Younger and the Shah Izdegerd. It was during one of these negotiations that he convinced Izdegerd to provide religious freedom to Christians and he was able to obtain the relics of several Persian martyrs which he relocated to Martyropolis (and the reason the city bore that name). He participated in the Second Ecumenical Council in A.D. 381 and has left behind several writings including: Commentary on the Gospel, Verses of Maruthas, Liturgy of Maruthas and The 73 Canons of the Ecumenical Council at Nicea. 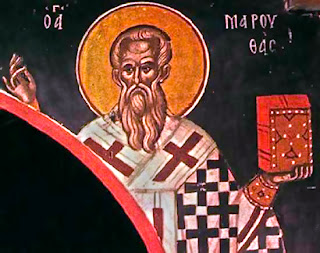 Of interest to me is that he wrote in Syriac, which those outside of the world of biblical scholarship might not realize is a really important language. The reason for this is that we have no original text of the OT. Yes, we have Hebrew texts, but those are the ones translated by the Mesorites after the fall of Jerusalem and destruction of the Temple in A.D. 70. I say translated because the original Hebrew text had no vowels and Mesorites added them. Thus, the Hebrew we have is merely one of many textual witnesses to that original text and, when compared to other languages and translations, isn’t even the oldest. While not considered definitive, there are a bunch of textual witnesses written in Syriac. When there is a discrepancy between other translations (Greek and Hebrew being the most authoritative), the Syriac is consulted to see how others understood the passages in question.

Beedo of Dreams in the Lich House has recently been meditating about True Names as they can be found in a lot of popular fantasy fiction (notably the excellent Earth Sea Trilogy by Ursula Le Guin).  He mentions briefly the power of names in the Scriptural tradition and I’d like to take a moment to expand on that idea in context of the evocative title The Verses of Marutha and the Syriac language.

Names are terrifically important in Scripture. As they do in fantasy literature, they hold power, particularly creative power. Note that God allows Adam to co-create with him in Genesis 2 by allowing Adam to name the animals. Note also that this exercise was to try and find a help-mate for Adam — he sought to find power over a particular animal by naming it.

This effort continues to this day as we try to scientifically categorize creation and is seen manifested when we name the disease that afflicts us when we are sick. If we know what the disease is, we know how to fight it. Theologically, we do the same with sin. When we confess our sins, we name them and have power over them.

Moses sought power over God by asking His name, so God responded with a sentence that begs for a predicate: I AM — we can never have power over God because His name is infinite and cannot be contained by language. Indeed, the number of Scriptural titles and names for Christ are manifold.

God names or re-names important people within Scripture. Here are a few examples:


In the tradition of the Orthodox Church, when a celibate is ordained, they are given a new name. This also happens with the Popes of Rome.

Now to pull all of this together into an evocative feature of an FRPG campaign world:


Thus, when the PCs know they are going up against a truly powerful opponent (like the Lich in Beedo’s example), one of the prefatory quests can be a search for the fantasy analog of the Verses of Marutha wherein is found the creature's True Name.