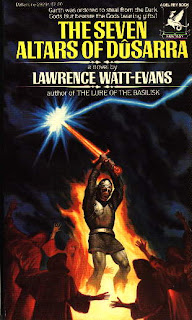 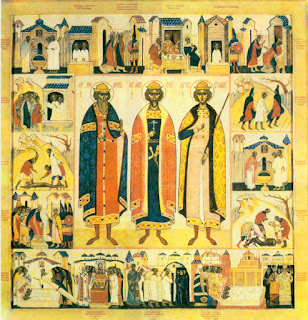 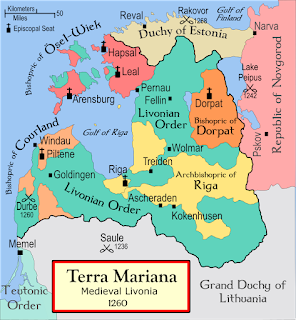 It always surprises me at how cathartic a funeral is, especially the one we had for Panael. Rufus specifically thanked me for taking such good care of Panael’s body. Given the fate he faced had the Thanati worm taken hold, things could have been much worse. I prevented more pain. That these people have suffered so much to take comfort in death is amazing.

Now that I am past self-pity, I have begun to realize that Panael sacrificed himself that I might live and that as such, I owe him and his people my life and all that I am. Through him, Isten has finally made me comfortable about this calling for this city and these people.

We can no longer call where the hobgoblins and spiders are a “lair,” there is a far larger complex below than we ever imagined. When we followed what Cuinn called “heavy traffic,” we found a huge room with what amounts to river running through it. There was a bridge crossing the flowing water in the middle of the space and on the other side was an encampment of hobgoblins.

Morivam promised that he could incapacitate several of their number with a spell, so we decided to charge. Unfortunately, these hobgoblins were combat veterans and organized themselves quickly. Panael took a spear meant for me and as a consequence opened himself up to another. Despite Panael’s sacrifice, Morivam’s spell was too much for them and the few that remained fled.

We tried to to pursue, but the passage they retreated down proved to be a maze of natural caverns and any chase through them was deemed too dangerous. While I chopped off Panael’s head with his own sword to prevent the Thanati worm from taking hold of him, the rest of our party took stock of what the Hobgoblins had managed to smuggle beneath the city.

There were enough weapons to arm a large raid including saddles and horse tack branded with the sign of a wolf howling at the moon. There was even a long dead corpse armed with a falchion and suited in a bronze breastplate. I surmise that these items may very well have been booty from a raid either from some other group inside the city, or perhaps from before the hobgoblins slinked into Redwraith.

Given the wounds and casualties we suffered, it was decided that we retreat for now.

The others have continued their raid into the complex. Given the loss of Panael, I could not bring myself to join them. At the moment, I am the only real protection the faithful have here in Redwraith. We decided to take the hobgoblin’s equipment and use it as an emergency stash for the church itself. Blaise and Mirela helped me to secure a large number of bricks and mortar. I have spent large amounts of my time, with intermittent help of various members of the church, to start building walls around the sunken courtyard in front of the church proper. At the very least, we will have a better defensive position and someplace to retreat to in an emergency.

I must admit, however, that I find such simple work to be restful for my spirit, if not my body.

I am beginning to worry. No one has returned from the raid on the spiders and the hobgoblins. I did give Cuinn one my healing potions in case someone got hurt since I would not be there to minister any wounds. Still, what is taking so long?

SWCL Adventure Module: The Burnt Village of the Restless Dead

I have slowly been working on my own version of The Temple of Elemental Evil for use with SWCL. Rather than releasing it all at once, I have created the moniker Adventure Tools. This allows me to release each finished section as its own adventure that can be modularly added on to any campaign or any megadungeon. The first release can be found here.

This release is a bit unusual in that it is a surface encounter area that leads to a dungeon rather than a part of the dungeon itself. I will be interested to see if and how this gets used. 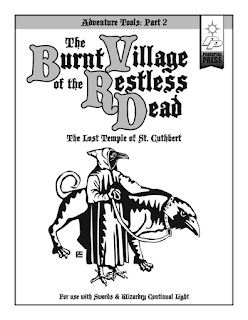 As is normal for me, this comes with the disclaimer that I am a hobbyist and have edited this as best as I am able, but there will be mistakes. Please consider the comment section a thread for any typos etc. that you catch. Thank you!

The module can be found here.

Be illumined, illumined, O New Jerusalem; for the glory of the Lord has arisen over you. Dance now for joy, O Zion, and exult. And you be merry, O pure Theotokos, at the arising of the One you bore. — Ode IX of the Canon of Pascha

I had a few people reach out to me to see if I am okay, especially since I was quiet on Easter.

Firstly, I am fine, just insanely busy. What time I have had for gaming has been dedicated to actual play and trying to get the second installment of Adventure Tools finished. Thus, the blog has been neglected. Hopefully this will change in the near future.

Secondly, for those who are not aware, this past Sunday was Palm Sunday for me and mine. Orthodox Christianity uses a different calendar than Western Christendom and the Sundays we celebrate what we call Pascha can very wildly. This year we are one week later. Thus, for those looking for the "Christ is Risen!" post, that will be posted this coming Sunday.

Finally, thanks for the concern. It means a lot.