There has been a confluence of events and ideas lately that are all peripherally related and I wanted to chew on them all in hopes of putting them all together in a way that will give every one a means of meditating upon the megadungeon/dungeon adventure if not a tool with which to make one.

Let me first break my silence about the Dwimmermount project by Mr. Maliszewski. There has been a great deal of disappointment when it comes to this project, not the least of which is the dead lock the project is in due to personal circumstances. I have four things to say:


Personally, I have only recently started to read all the material available to Dwimmermount backers, and in context of what is available I do not see the first level boring at all, but (again) I got what I was looking for. However, I do appreciate the conundrum, especially since my own attempts at a megadungeon in my Lost Colonies campaign met with mixed results.

To that end, let me call attention to a number of my older posts and bring them into the context of the long shadow of Dwimmermount:


This brings me to my current project, my re-imagined version of The Caves of Chaos from B2: The Keep on the Borderland. I used The Tome of Adventure Design heavily as I constructed my vision of the caves and the result was a series of small dungeon sections which I pieced together to come up with what I feel is and rather exciting 1st level adventure with the potential to become a megadungeon should anyone want to take it that far. No boring here.

A huge reason that I feel this way about the dungeon is the fact that simply looking at a section of the map, with a title taken from a landmark derived from a random table is truly evocative. I could run this adventure on the fly simply from looking at these maps. For example: 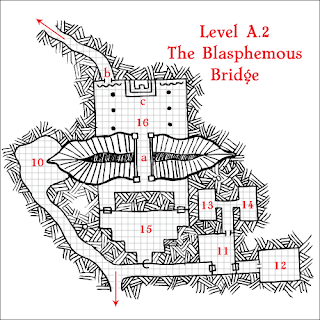 This map is just brimming with possibilities and could be used in all kinds of different contexts. Indeed, it is specifically designed to do exactly that.

Thus, I challenge everyone, instead of whinging about how your latest Kickstarter is behind schedule get out a pack of 3x5’s, draw some maps, label them with evocative landmarks and titles, put them out there for people to use and let us see the fruit of this re-examination of the megadungeon that Dwimmermount has so successfully and beautifully done. I pray this challenge does not fall on deaf ears.

Finally, I need to acknowledge that both James and Matt have made me a better player and a better dungeon designer. I’d like to take the time to thank them both.