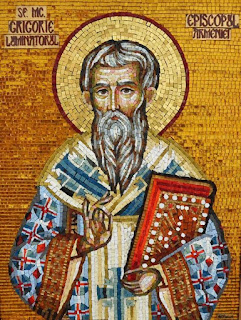 Well, I just finished a week sans wife taking care of the kids by my lonesome. Thus, blogging became a very low priority; however, I do want to share the fact that I am working on an introductory adventure for Star Lite. Here is the map, enjoy! 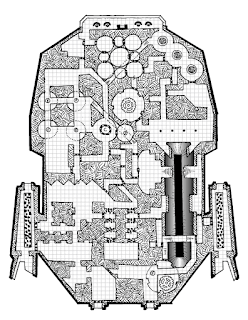 Saint Saturday: The Ancestors of God Joachim and Anna

Today is the Feast of the Ancestors of God, Joachim and Anna. The title “Ancestors of God” is a title derived from the fact that they are the parents of the Virgin Mary. During the Christological controversies that arose during the 4th to 8th centuries, she received the title “Theotokos” which literally means “The Mother of God.” This all has more to do with Christ than Mary or her parents because both titles (Ancestors of God and Theotokos) speak to the fact that Christ is both God and Man from conception and thus speaks about the nature of Christ rather than anything about His mother or grandparents.

For those who know their Scripture, Joachim and Anna are not mentioned anywhere in the Bible. Their story, and the story of the Nativity of the Theotokos (which was yesterday) appears in the Protoevangelium of James, a book known by most to be apocryphal. This, however, is a misnomer. There are many popular, early Christian writings that do not appear in the Bible because they either do not focus on the main point of the New Testament (Christ, HIs crucifixion and His resurrection) or are too far removed from the Apostles to be included. This can be seen in the fact that several of the Mariological feasts of the Orthodox Church refer to events in the Protoevangelium of James in the hymns surrounding these feasts.

Joachim and Anna were old when they had Mary. Anna was barren and beyond child-bearing years when she miraculously got pregnant. This is another reason that these stories have not been rejected by the Orthodox Church: it follows a pattern found all over Scripture. Women in both the OT and NT who are barren and beyond child bearing years find themselves pregnant through the workings of God. 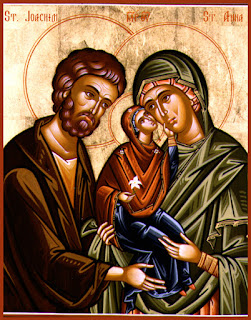 This highlights something that is largely lost on the modern world: women’s real power derives from their ability to bear children. Take a look at this hymn:


Both Joachim and Anna from their sterility's stigma, and Adam and Eve from their mortality's ruin have been set free, O immaculate Maid, by your holy nativity. For this do your people hold celebration, redeemed from the guilt of transgression as they cry to you, "The barren one bears the Theotokos, the nourisher of our Life.”

While this hymn magnanimously lumps Joachim in with Anna’s failure to bear children, it was primarily her shame as revealed in the last line where she is called “the barren one.”

Also missed by the modern world is the power women derive from chastity — the ability to manipulate men who want to have children by them. This power is emphasized by the fact that Theotokos is called Virgin before, during and after childbirth. The birth of Christ does not bring with it corruption (the physical damage that happens to women who go through childbirth).

This offers some interesting fodder for world-building in a fantasy setting. There is a fantasy trope that ties spell-casting and prophecy with women and virginity. Those who have these powers lose them when they lose their virginity. This suggests a world where spontaneous arcane Vacian-like spell casting is only available to women who still have their virginity. Ritual magic can still be used by men and by all women and suggests the import of scrolls, wands, staves, potions and my interpretation of Magic Missile according to Holmes. Speaking of Holmes, his rules that 1st level magic-users can create scrolls becomes a model rather than an exception. This also explains why adventuring is incentivized: arcane spell casters need the various components necessary to create magic items.

This understanding of arcane magic gives us leeway to make a starker difference between it and divine magic. Whereas the arcane is about ritual, magic devices and the need to be a female virgin to spontaneously cast, divine magic can forgo all of these things and offer spontaneous casting to anyone who takes on the mantel of “cleric.” This works especially well in context of a Christian/pseudo-Christian Church.

Christ offers a radical equality to the world: His Body and Blood. With this brings a forgiveness of sin (that which separates us from God). Thus, corruption in context of wielding magic is healed and the mechanism for magic is the Holy Spirit rather than the innate power of the human body.

Thus, the contrast, conflict and choice of arcane vs. divine magic largely pivots upon magic items vs. spontaneous casting if you don’t want to play a female virgin.

In my last post, I didn't receive much feedback as to how to edit my Star Frontiers + Swords & Wizardry Light Mash-Up, so I am going with the easier of the two routes and going with a system that needs a little more work by the end-user to convert to other systems. Therefore, I give you:

You can download a copy here (this link has been updated).

I have also done up a half-sheet Character Sheet for those interested: 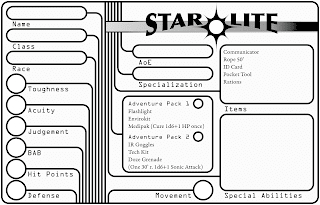 It can be downloaded as a .pdf here.

UPDATE: As I mentioned in the comments, once you release something into the public, all kinds of mistakes suddenly become visible that weren't before. Thanks to porphyre77 for pointing out a misspelling that was not caught by the spell-check and for suggesting a different font. I normally use the fonts I do in all the stuff I make for myself because not only do I find them pleasing to the eye, but they remind me of two of my greatest literary influences: HPL and CAS; however, I can understand how in this application it might not be the best choice for everyone. Therefore, for those who would prefer a font choice more reminiscent of the 1970s and the roots of our hobby I present to you a second layout with a few changes for space which can be found here. 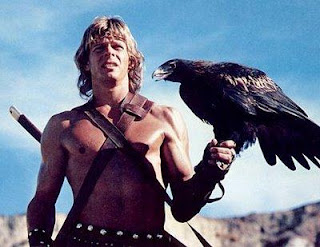