Today is the feast of Sisoës the Great, a monastic saint of the fourth century. He began his ascetic trials at the monastery Nitria, just outside of Alexandria, Egypt. After the death of St. Antony the Great, St. Sisoës went out into the desert to live in the same cave that Antony died in. He lived a life emphasizing humility, as is evidenced by the story of his death.

As his brother monks gathered around his death bed, the face of St. Sisoës began to shine as if the sun. When prompted, he began to describe the coming of St. Antony, then the Prophets and then the Apostles. He then began to speak. When his brothers asked who he was speaking to, the saint explained that the angels had come for his soul and he was begging for more time to repent.

The monks tried to argue that he had no need of repentance, but the saint replied, “I do not think that I have even begun to repent.”

The light of his countenance then became unbearable as he explained the the Lord was coming. Then there was a great flash of light, the air was filled with a sweet fragrance and then (as the Orthodox Church likes to say) St. Sisoës fell asleep in the Lord.

As inspiring as this story is, I want to talk about this icon: 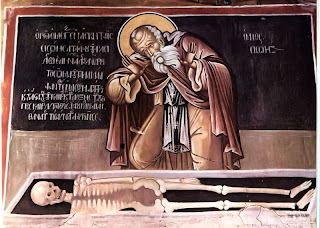 It is called The Astonishment of Sisoës the Great and depicts the saint at the tomb of Alexander the Great.

During the fourth century, Emperor Theodosius began to issue a series of decrees outlawing the worship of pagan gods. At this time, Bishop Theophilus of Alexandria obtained the legal authority over a pagan temple (some accounts have Dionysus, others Mithraeum), which he intended to renovate into a Church. When secret caverns beneath the temple were discovered, this caused a major conflict between the pagans and Christians. The pagans were forced to retreat into the Serapeum, the main pagan temple, taking Christians as hostages. Though many Christians were tortured and thrown into pits used for blood sacrifice, Theophilus asked for leniency from the Emperor; however, he did ask that all pagan images be destroyed. As a result, the Serapeum was demolished by a combination of Roman soldiers and monks. It is at this time that the remains of Alexander the Great disappeared from the historical record.

St. Sisoës was a contemporary of these events, thus, despite a lack of any written record, what is depicted in the icon is probably an actual occurrence.

The inscription on the icon reads thusly:


Sisoës, the great ascetic, before the tomb of Alexander, King of the Greeks, who was once covered in glory. Astonished, he mourns for the vicissitudes of time and the transience of glory, and tearfully declaims thus:

“The mere sight of you, tomb, dismays me and causes my heart to shed tears, as I contemplate the debt we, all men, owe. How can I possibly stand it? Oh, death! Who can evade you?”

In other words, it doesn’t matter if you are one of the greatest kings in the history of the world, or if you have conquered all the world, or gathered riches from all the world: in the end death makes us all a pile of bones.

An interesting note about the Serapeum: it is named for the Ptolemaic pagan god Serapis. He was named the protector of Alexandria and was a syncretic combination of Osiris and Apis. This was done so that these local gods could be accepted by the Greeks, who ruled Egypt after Alexander until Egypt fell to Rome. I find it fascinating how politics helped create a pagan cult which became the center of pagan worship in Alexandria.

Besides exposing me as a history geek, this story has an interesting twist on factions within a dungeon — faction can be outside the dungeon fighting each other for the right to explore/protect/go in. Thus, the PCs have to negotiate with various parties to get into the dungeon, and may find that the control of the dungeon entrance has changed when they return to the surface (giving the DM/Ref/LL/Judge plenty of opportunity to have fun with the players).