Today is the Feast of the Virginmartyr Apollonia. She was an elderly deaconess of Alexandria whose martyrdom is described in an extant letter of St. Dionysius of Alexandria. According to the letter, the persecution of Emperor Decius (A.D. 249-251) began a full year earlier in Alexandria than the rest of the empire and St. Apollonia was one of its victims.

The letter describes a “prophet of evil” who stirs up the masses against the Christians. Mobs backed by the government started to assault the homes of known Christians. St. Apollonia was pulled from her home, beaten about the face until her teeth were knocked out and drug outside the city to a fire the mob had built. They threatened to throw her in should she not worship the idols. She asked for a moment to pray. Understanding that she would be raped before she was killed, she took her chance to preserve her virginity and lept into the flames where she was consumed.

Due to the nature of her torture, she is sometimes depicted with a golden tooth around her neck or holding a pincer with a tooth. 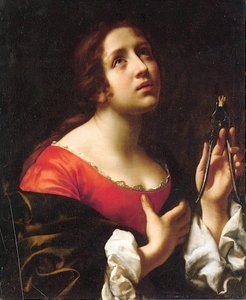 There are several accounts of virginmartyrs who throw themselves to their own death rather than risk being raped. One might legitimately ask why these women aren’t damned for committing suicide instead of being celebrated as saints.

Suicide is the deliberate destruction of God’s gift of life as an act of spite. It is the ultimate act of turning away from God and a denial of God and His Kingdom. In contrast, these women are already dead — their fate is sealed. Rather than taking their life in spite of God, they not only offer themselves up as sacrifice, but also their virginity. Only in these extreme circumstances is such an act deemed acceptable.

Due to the fact that this whole episode sounds strange to the modern ear, I suppose this invites a discussion about what is valuable. Traditional D&D places value upon treasure and the death of monsters by equating both with experience points, with treasure being more valuable than the death of a monster.

This, of course, rewards certain kinds of behavior. Others have spoken about how this dynamic changes in other iterations of the game where treasure is less valuable than killing monsters or even setting off traps. Thus, I am not as interested in going over the same ground, but rather interested in how things besides the traditional D&D values might shape the assumed culture of a game. For example:


I mention these in context of the discussion about the dungeon-as-adventure. I love the Mythic Underground understanding of the dungeon and (as a player) it is my favorite way to play the game; however, I understand that there are many people who actually find that sort of thing boring. Wilderness and city adventures hold much more allure; however, in my experience what is valuable in the dungeon (treasure) makes for a far more morally ambiguous gaming experience outside the dungeon— especially in context of a city. Placing value on things other than treasure could possibly make for a far more interesting campaign in these cases.

The Teeth of the Virginmartyr


These rare items appear as human teeth made out of gold. While valuable for the gold from which they are made, they also radiate of magic. Should one wear a tooth on a necklace, the bearer would feel warm and comfortable regardless of the actual temperature and can get restful sleep regardless of the situation. Should one replace their own tooth with the magical tooth, the bearer would also gain the effects of a permanent Resist Fire spell.