Orcs and the One and the Many

Over on BX Blackrazor, JB is meditating on the D&D trope of killing gods. In the comments, I pointed out that the game has been giving gods Hit Points since 1976 and the publication of Supplement IV: Gods, Demi-Gods, and Heroes. I also tried to explain why I (as a Christian) don’t really have a problem with giving gods Hit Points.

This struck off a conversation that I think deserves its own post, because I make some hefty claims that need their own space to be meditated on and discussed. The most important (and probably controversial) claim is that reality as we experience cannot be fully explained by anything other than the Christianity of the Early Church (by which I roughly mean the first millennia or so). At the core of my argument is a problem that has confounded philosophers since the ancients first tried to understand reality. It is called the Problem of the One and Many. To illustrate this, I present to you this illustration of an orc: 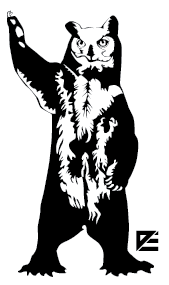 But, Padre, you say, that is not an orc, it’s an owlbear! To which I respond: how do you know?

This may seem an idle question, because it should be obvious that the above illustration is, in fact, an owlbear and not an orc. Even so, in order for us to be able to make that distinction two things need to be very real: owlbears and orcs.

As we all know, however, owlbears and orcs are not real — outside of our imagination. Yet, there exists something that allows us to not only imagine these non-existent creatures but to recognize something we have never before encountered as one of these imaginary creatures. To say that “something” is “the brain,” or “chemicals,” or “an electrical current in our nervous system” side-steps the real issue:

You have very likely never seen the above illustration. I know, because I am the one who drew it and this is the first time I have ever shared it. This new empirical experience that you have just had of seeing this illustration for the first time has triggered an interaction with an interpretive framework that not only allows you to understand that you are looking at an owlbear, but also allows everybody else to see an owlbear despite being potentially thousands of miles apart and growing up in completely different circumstances in terms of language, culture, and beliefs. If we didn’t have this nigh-universal interpretive framework, this brand new experience of seeing my illustration could not result in you seeing an owlbear. It would just be light.

And finally, we come to the crux of the problem:

This illustration is unique. It is its own particular illustration by yours truly. At the same time, it is also an owlbear — it shares the nature of owlbear-ness that all owlbears do. In other words, it is one and it is many. Ancient philosophers wrestled to explain how it is that everything is both one and many at the same time. We must wrestle with it because it is part of reality. I am Fr. Dave and I am a human being. Without the one and the many we would not be able to function in the world. We would have no idea how to interpret the data coming in through our senses.

Materialism does not do an adequate job of explaining the reality of the one and the many, because it cannot merely come down to physical, material things. Owlbears aren’t material, physical things, after all. Yet they are real.

In contrast, it logically follows that a God that is both one and three, who created humanity according to His image and likeness, and, as Paul says in Romans 1:20, reveals his eternal power and divine nature in the things that have been made, would create a world where everything would demonstrate both His oneness and his multiplicity.

Though You went down into the tomb, O Immortal One, yet You brought down the dominion of Hades; and You rose as the victor, O Christ our God; and You called out "Rejoice" to the Myrrh-bearing women, and gave peace to Your Apostles, O Lord who to the fallen grant resurrection. — Kontakion of Pascha