Saintly Saturday: The Presentation of Our Lord and Savior in the Temple

Today is one of the Great Feasts of the Orthodox Church: The Presentation of Our Lord and Savior in the Temple. This comes from the second chapter of Luke where Christ fulfills the Law (found in Exodus) by being presented forty days after His birth at the Temple as the first born son with a sacrifice of two turtledoves or two pigeons.

Waiting for Him is the elder Symeon, who had been moved by the Holy Spirit to be at the Temple that day. Upon seeing the Christ child, he takes Him in his arms and cries out:


Lord, now let your servant depart in peace, according to your word; for my eyes have seen your salvation which you have prepared in the presence of all peoples, a light for revelation to the Gentiles, and for glory to your people Israel. — Luke 2:29-32

This story gets really interesting if one looks into the hagiography of Symeon. He was an Alexandrian Jew who was born over three centuries before Christ and was one of the scholars gathered together to do the Spetuagint Greek translation of the OT. When he came to Isaiah 7:14, he did not want to translate the key part of this verse as the virgin shall conceive and bear a Son. As he was about to write maiden in place of the word virgin an angel stopped his hand and declared that he should not die until he saw this prophecy fulfilled.

In other words, when Christ arrives at the Temple forty days after His birth, Symeon has been alive for over three hundred years and when he says, “Lord now let your servant depart in peace” he is asking God to finally allow Him to die. 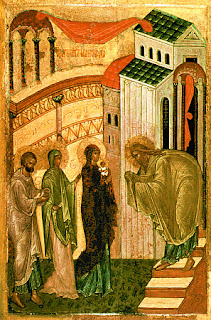 In fantasy, prophecy is one of those tropes that I do not care for. This is in large part due to the fact that it fails to understand the real purpose of prophecy, which is the revelation of God. I also dislike it because it is lazy storytelling that largely removes free will from the equation.

Due to the fact that RPGs (especially the way that I prefer to play them) are largely dependent upon player choice, prophecy is not something I have ever seen work well in the context of an RPG. One of two things is likely to happen: the campaign gets railroaded into fulfilling the prophecy (thus begging the question, why is this an RPG game and not short story, novella or novel?) or the character in question does something (like dying) so that the prophecy proves to be false.

A far more productive use of prophecy within the context of an RPG is that found in the historical context of the prophets: they were warning the people of God about the consequences of their behavior. If you continue to ignore God (and the fact that you are made to become like Him), bad things are gonna happen.

This does two things: 1) it honors the true purpose of prophecy — it reveals the characteristics of God that we can aspire to be like; 2) it honors human freedom — there is no coercion when you tell a child that if you touch a hot burner on the stove, you will be burned. This use, of course, assumes you are interested in including the kind of theology into the hobby that I am.

Even so, the aspect of this story that interests me the most is the idea of an NPC who cannot die, but rather than seek ways to exploit it (as the various flavors of undead are want to do), this person is seeking out the circumstances in which they can die. Due to the simple fact that this undeath is not being exploited, such a character is obviously trying to either undo some wrong or seeking out a specific kind of good.

This makes for a potentially fascinating interaction with PCs who are normally obsessed with not only not dying, but exploiting the various powers granted them through experience and adventuring. It turns a lot of gaming (and life) assumptions on their ear and challenges everyone to look at the game (and life) from a different perspective. Not to mention the fact that such an NPC would make an absolutely fascinating patron, because once the criteria of what this person needs accomplished is known, a direct interaction with the NPC is not actually necessary. Thus, whenever circumstances come up that might fit the criteria, the PCs are given a choice — do we make a side-trek to help the patron on our own or do we do what we really want to do and continue to potentially doom this person to what he or she perceives as a curse? What happens when those opportunities are ignored?

This is the kind of NPC that has the potential to be a catalyst for players making interesting choices that result in great gaming sessions — something the fantasy trope of prophecy never can.