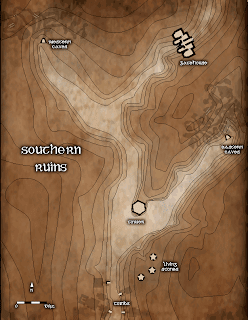 In the world of Erimia, monsters and the forces of Chaos are personifications and physical manifestations of sin. This is in keeping with the metaphor of the campaign where adventurers are akin to Christian monastics venturing out into the wilderness in order to fight the devil and his minions where they live. This raises the question, what is sin?

At its most basic meaning, sin means missing the mark. In context of humanity's relationship with God, it means our failure to keep on target with the "likeness" of the image and likeness of God within us. Our life in God is a process by which we become more like Him. God has revealed His image to us primarily in two ways: the Law and the person of Jesus Christ. Both of these reveal God to be a relational being. Note how Christ summarizes the Law:

Gluttony — I wastefully consume at the expense of those who hunger, harming not only my relationship with my fellow human being, but with the earth that provides my food, and my God who gives me all of these things as gifts.
Sloth—I fail to love anything enough to give my all. This harms relationships with everybody — nothing, neither God nor anything in creation, is worth my time and effort.
Lust—I objectify my fellow human being, subjecting them to my own selfish need for pleasure. I disregard both their needs, and the image of God within them.

From the perspective of sin, there is no such thing as a victimless crime (as anyone who has a relative that is an alcoholic or addict can tell you).

In designing Erimian monsters as personifications and physical manifestations of sin, I try to give them abilities, tactics and/or powers that actively try to destroy relationships. This destruction then leads to an easier target to kill. As adventurers continue to encounter these monsters, they must work together to create strategies to prevent the destruction of these relationships in order to more effectively overcome the monsters and the sins they personify.

With this in mind, I give you the Xeraphi:

Xeraphi are small, aggressive cousins of the gnolls. Their size and lower hit dice are deceptive — Xeraphi can be extremely dangerous. Their skin excretes a liquid that gives off a scent that sends other creatures into a blind fury. Non-xeraphi with an Int less than 17 must save vs. spell or go berserk, attacking friend and foe for 10 rounds. Only one save is necessary per encounter. In addition, this liquid can be boiled down into a sticky substance the Xeraphi put onto their weapons. Any successful strike by a Xeraphi requires their target to save v. poison or take an additional d6 damage. This poison may be taken from the pelts of the Xeraphi. Each corpse will produce 1d3 doses. However, anyone using this poison will also produce the fury inducing scent that requires every new encounter to save v spells or go berserk.

Xeraphi travel in packs. These packs are generally lead by female necromancers and Xeraphi are very comfortable around the undead — they are one of the few non-Xeraphi that are immune to their scent. When a pack is encountered, it usually includes undead, especially skeletons and zombies. 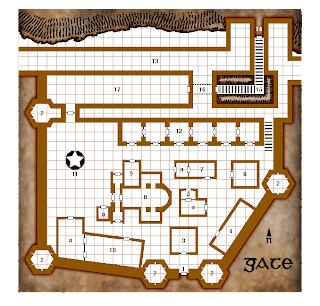 Here is a map and description of Gate for the Erimia Campaign. This small community of those soldiers (mostly Replicants) who guard and maintain the small gate of the city and those merchants that sell the soldiers their wares serves as the launching point for adventurers into the wilderness. 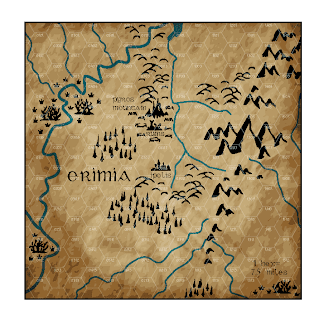