So, one of the comments on my post on How I Homebrew a Dungeon, I was asked If I could do the same for a dungeon for characters 6-9th level. My short answer to the question is: No.

In other words, by the time my players have advanced to 4-6th level, they have accumulated enough power and influence that the focus of the campaign shifts from that of dungeon exploration to politics, clearing out wilderness areas, and spending a bunch of money on building stuff (this is nicely encouraged by the Arneson rule where 1 xp = 1 gp spent).

So, I have never really had to homebrew a 6-9th level dungeon. As predicted by Cook’s Expert edition of D&D, by the time my players’ characters get to 4th level, I am usually designing wilderness areas, encounters, and lairs — not dungeons.

That doesn’t mean I can’t or I won’t, especially since folks seemed to find my last outing useful. This endeavor, however, does come with a major caveat. What I have in mind doesn’t really qualify as a dungeon…it is more of an elaborate lair. For me, the word “dungeon” is indicative of the Mystic Underground where no matter how deep you go, there is always something else deeper and more dangerous and the place itself is trying to kill you, not just the monsters.

There are two main reason I am choosing this particular path. First, without the previous 5 levels of a megadungeon and a campaign to riff off, doing the 6th level of such a place is both too daunting and too boring. Secondly, I’ll probably never see a day when I’d actually use it in play. By going the route I am, this will go into my folder of stuff I can pull out on a moments notice to fill a need in an ongoing campaign.

Since this is to be a type of lair, I need to figure out what monster lives there before I go to making or finding a map. So, I pulled out The Tome of Adventure Design and rolled up a person associated with the place, the last significant event that happened there, and the original purpose of the place.

As an aside, when I use random tables (especially one where a d100 is concerned), I freely read the dice in as many ways as I am allowed in order to give me more than one option when it comes to results. This allows me a bit a wiggle room and the ability to be inspired.

I then rolled an original purpose and who built it: that was when things began to crystalize. I rolled up a Scriptorium that was built by a unique type of Giant.

The Cleric no longer made much sense, so I went with the Assassin and I ended up using both a place of burial and a place of guilt.

This place was built by a blind giant who was a scribe and a scholar. He needed a way to record the research he had done and so came up with a writing method akin to Braile (note to self, Read Magic is necessary to interpret his writings). For this purpose, he needed someone to dictate various texts to him so that he could study and record his findings.

This role is taken up by an Annis Hag and the two end up falling in love with each other. Whether or not the Giant’s love was voluntary at first or not, the important part here is that the Annis Hag ended up in love with the Giant because he saw past the ugly exterior.

This love story, however, has an ugly underside because the Annis Hag still had an appetite for human flesh. When she made the mistake of lunching on a local prince, an assassin was hired to take her out. The killing blow, however, fell upon the Giant who sacrificed himself for his love.

Among the things and knowledge collected by the Giant was the True Name of a demon and a magical harp that would summon it. In a fit of anguished rage, the Annis Hag used the harp to summon the demon and commanded it to torture the assassin as long as she was alive. Unfortunately for her, summoning the demon destroyed the harp. Caught in the magical explosion, she suffered grievous wounds which have never fully recovered. In order to make sure the assassin suffers as long as possible and to guard her own life, she has since drawn a protective circle around the demon and its prey. At this point the demon is kept at bay virtually by will alone.

In the meantime, a group of hobgoblins have taken up residence. According to my own calculations, hobgoblins are eugenicists who love to experiment with breeding techniques.

Thus, they see value in the knowledge found in the Giant’s lair, the demon trapped there, and the hag that keeps it at bay. They have turned the lair into a house of horrors and feed the rejects of their experimentation to the hag to help keep her alive. For her part, she is grateful for every day the assassin is tortured.

So here is the challenge for the players: this is the location of a McGuffin. Whether a magic item in possession of the assassin, a particular piece of information on one of the Giant’s “scrolls,” or something else, it is inside the protective circle keeping the demon at bay.

Since this set-up is kinda mean, I want to reward the characters by providing a lair that could be converted into a stronghold if they so desire. As a consequence, I am looking for a map of a castle with a dungeon. I found that here. As I did with my 1st level dungeon, I proceeded to number each of the rooms: 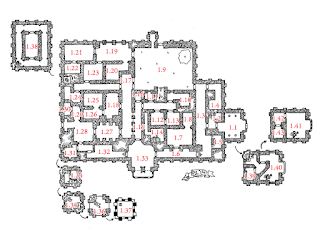 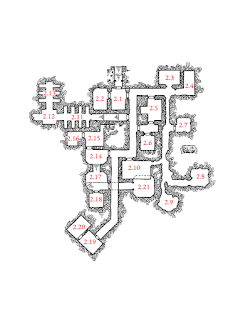 Between the castle and the dungeon below there are 63 rooms. Using Moldvay’s “Stock the Dungeon Table” we get the following break down:

I rounded up on the number of monsters and traps with treasures and rounded down on Empty rooms to make the math work. I erred in the direction of more stuff.

I can already sense some confusion because the main monster group I will be using are hobgoblins, which are Level 2 monsters according to Moldvay. This is where S&W becomes really useful. The Wandering Monster Tables found therein are organized according to Challenge Level. Hobgoblins are CL 1; however, Carnivorous Apes (which hobgoblins are known to associate with) are CL 4. The Wandering Monster Tables suggest combinations of different CL monsters and since hobgoblins are interested in genetic and breeding experiments, it opens up a lot of possibilities for higher level monsters:


Following the suggestions from S&W we come to the following totals:

In case anyone is wondering where I am going to fit 117 hobgoblins, remember that this place was built by a Giant. Thus, everything is twice the size a map normally would be — giving me plenty of room to stuff all these creatures wherever I want.

There are 18 rooms with treasure. If each has 5000 gp I will have 2200 gp left over to place where I deem fit in the moment (probably with the Annis Hag hidden inside the tomb of the Giant).

Now to place all of this stuff in the dungeon:

The Annis Hag will be in Room 1.38, an appropriate place for a bedroom turned tomb.
The Erinyes will be trapped in Room 2.21, being the lowest part of the entire structure.

As for the rest of the monsters, they can be categorized into three types:

1. Hobgoblins and their allies
2. Prisoners used to do breeding experiments
3. Failures

The failures would be the Gibbering Mouthers, which are locked away in Room 2.20, since that is nice and isolated.

The prisoners could all be stored away in Rooms 2.3-2.10. These include the basilisks, cave bears, cave trolls, ghouls, perytons, and trolls.

The rest of the monster populate the upper floor, with the hobgoblins, carnivorous apes and gorilla bears primarily occupying the towers — Rooms 1.35-1.37 and 1.39-1.43.
girallons and flying apes would occupy Rooms 1.1 and 1.9.

That’s 22 rooms with monsters. Also note: I’ll probably sprinkle hobgoblins, thouls, and carnivorous apes throughout the last 20 rooms to demonstrate the basic theme of its current use.

Room 1.3 is a magical hall of perfumes. The central section of the hall rains down clouds of the stuff from the ceiling when someone passes through. The stuff is so strong it reduces the chances of surprise to 1 in 6 for 24 hours.
Room 1.5 is a magical hot tub that automatically undresses anyone entering and drying and clothing anyone leaving (with a small percentage of some kind of screw-up)
Room 1.6 is a magical gallery; however, the “pictures” are designed for the blind.
Room 1.8 is a magical music room with various levers and buttons that create various sounds. The music is designed to play throughout the castle, alerting everyone of the player’s presence.
Room 1.21 is a magical kitchen and 1.22 is be a magical ice room for storing food.
Room 1.27 is a library with a device that fetches certain books, but only works if the commands are given in the language of giants.
Room 1.33 is the scriptorium, with a special device used to create the “Braile” scrolls created by the Giant.
Rooms 2.11 and 2.13 are incubating and birthing chambers for the breeding experiments.

Rooms 1.15 and 1.17 are suggestive because of the portcullises indicated on the map.
Rooms 1.2 and 1.31 are good candidates to alert the hobgoblins in the towers.
Room 2.17 has access to the demon.
Room 2.19 keeps the Gibbering Mouthers at bay.

For the rest, I might note some things to indicate this was once the home to a scholar with servants. Servants quarters, storage rooms, guest rooms, supplies necessary for scholarly work, etc.

Note: I have sprinkled some cool features within this castle that might prove useful should the players ever want to claim this as their own. Consider it an incentive and a reward for putting up with my dark sense of humor.

Also note: The chances of me ever actually using this are not high. But who knows, it may one day prove useful...if not to me than someone out there who wants to take this and run with it.