In a continuation of Week Three of the Challenge, the next step on the list is placing monsters. Otus suggests 11 (probably to make coming up with a Wandering Monster Table based on 2d6 (2-12) dead simple. Lets compare this to the math of my favorite style of stocking a dungeon — Moldvay:

The number of rooms in this dungeon design range from 21 to 36. At the low end, Molvay’s math suggests 7 monsters and 12 and the high end. With 28 rooms, my dungeon is representative of an average dungeon size using Otus’ suggestion of 1d6+6 rooms per level. According to Moldvay’s math a dungeon that size should have about 9 monsters and a dungeon with 11 monsters would have 33 rooms.

So, the monster density is a little high for my personal taste; however, it is not outside the realm of possibility if one were to use Moldvay’s random method rather than simply adhering to the math.

In terms of numbers, I followed Moldvay’s suggestions on his Wandering Monster Table.

The next step is to place 1d6 features through out the dungeon. I rolled a ‘4.’ This is a wild deviation from Molday. According to the strict math of Moldvay’s Stocking Table my dungeon of 28 rooms should have 4.67 traps and 4.67 “specials” — more than twice the amount I rolled up and 1.5 times the maximum roll of 6.

I will concede, however, that traps and (particularly) specials may very well be the hardest part of creating a dungeon according to the Moldvay model. So, in context of quickly churning out a dungeon with three levels, this is understandable. That said, if one is fortunate enough to own The Tome of Adventure Design it has tables that let you randomly create both traps and tricks. So, several rolls can get you well on your way to 8 to 10 traps and specials.

One can tell I am used to designing dungeons using Moldvay’s model by my choice of using a Crashed Spaceship for a theme — it allows for a lot of the Traps and Specials demanded of the style to be creatively dressed up. In making my map, I planned for three: two engines room (one intact, one melted down) and the bridge which has a window which looks out into a frozen lake and a domed underwater city.

That leaves me with one feature: neanderthal cave drawings in the entrance cave depicting a star falling from the skies.

The next task is placing Treasure. This is interesting, because this number is going to be higher than Moldvay. Had I used his math (and his distribution of monsters, specials, traps, and empty rooms), I would have 4.5 monsters, 3.1 Traps, and 2.3 Empty Rooms with Treasure for a total of 9.9. In contrast, according to Otus’ math 7.3 monsters, 2.67 features, and 2.1 Empty Rooms have Treasure, for a total of 12.

Whether or not you like this depends on what system you use. Since I am using Moldvay’s Basic D&D as my chassis, 1 gp = 1 xp. Thus, Otus’ method of distributing Treasure means more potential experience for my players. I see this as a feature rather than a bug. To put this in perspective, here is my list of monsters with their xp value:

An average party of 4 PCs needs between 8000-10,000 xp total to get to second level. That means if this dungeon is to advance the characters to second level, there needs to be a minimum of 6,638 gp in treasure. Distributed over 12 rooms, that is an average of 553 gp per room. To make things simple, we can round up and say 600 gp per room.

As an aside, if I use the average gold amounts for the Treasure Types as noted in Moldvay, and leave out the Individual Treasure Types, here are the monsters that have treasure and their treasure totals:

I am actually really happy with that.

As far as Magic Items go, Otus suggests that 3 “Wondrous Items” be placed throughout the dungeon. He suggests pulling these from the source materials. I appreciate the use of the word “Wondrous.” This gives me the wiggle room to provide either actual Magic Items from Moldvay, unique items inspired by my source material, or “Specials” inside the dungeon that have “wondrous” effects. In other words, I can taylor this part of the dungeon design to how much magic I want in my campaign world.

Since one of the main points of dungeon delving in my campaign is to find greater sources of magic, I am sore tempted to use Moldvay’s Magic Item suggestions and re-skin them for my campaign. This would mean that I successfully rolled for either the Subhumans to have magic or I got lucky and I rolled for both the Ice Walker and the Skinwalker to have magic. Despite the incredible luck that I would have to have, I prefer the latter because it spreads things onto two different levels with the bigger reward on the 3rd level.

I (seriously) rolled up a Sword +1, +2 vs. Lycanthropes for the Icewalker (Ghoul). I’ll re—skin this as an ice weapon that is used against Skinwalkers and has a side affect of “freezing” them in a single form.

For the Skinwalker (Wererat) I rolled a Sword +1, +3 vs. Undead (seriously). This will be a plasma weapon usable by anyone that is extra effective against the “ice” creatures associated with the Winter Witch (Medusa).

Finally, I rolled up a Scroll with 2 spells on it. I randomly determined the spells and came up with Detect Evil and Dispel Magic; however, due to the hint of further adventure underwater, I decided to substitute the latter with Water Breathing.

The final step is the distribute any of the Theme Budget that is left (which, if you follow my advice from my last post, becomes irrelevant).

The Extra Credit for this week was to map out on graph paper the map, which I did as default (and interestingly it is suggested that Gygax saw this step is imperative) and to create a Wandering Monster Table. Here is mine:

Here is the final map with all of my notes: 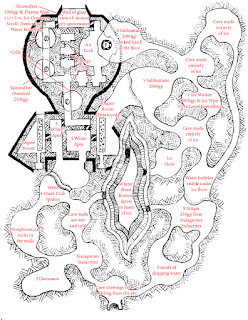