Running the First Session with Only One Dungeon

Yesterday, I waxed poetic about how I run the first session of a sandbox campaign. In it I posited several site-based adventures in order to facilitate player choice; however, this is not always possible. Sometimes I have only had the opportunity to work on one dungeon, or there is a serious desire to run a particular module. Player choice and the use of rumors seems to be severely limited, but it doesn’t have to be.

If I really only have one adventure that I can/want to use, I will approach player choice from the “why are we going” rather than the “where are we going” perspective. To give this meat, I will map out at least five factions that have interest in what goes on at the adventure site. I plug these factions into the Wu XIng diagram: 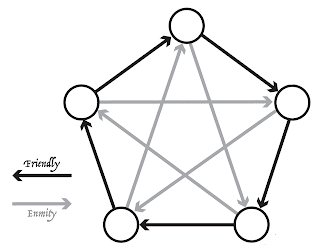 Each faction is given a goal and a reason why they like to work with the faction they like and why they are working against the faction that is their enemy. This quick and dirty system easily sets up a complex web of relationships that enrich the campaign.

Once this diagram is set up and understood, I make rumors to connect the players to each of the factions. Since each faction has a specific goal when it comes to the site based adventure and those goals are at odds with other factions, it gives real weight to player choice when it comes to why they are going on the adventure.

So, as an example, let’s pretend that I have to run the first session of a campaign in short order and I won’t have time to create anything elaborate in terms of adventure sites. Let’s also pretend that the one adventure I do have prepared is the one I produced in the post How I Homebrew a Dungeon.

Since I am in a pinch, I will fall back on familiar territory when it comes to my starting village: I’ll pull out my copy of T1:The Village of Hommlet and extrapolate from there. First, I will leaf through and find five significant NPCs that represent larger powers or ideas:


Now to translate these concepts into my campaign:


For purposes of keeping things simple I’ll label the five with the following monikers:


The Kingdom
The Church
The Old Way
The Village
The Cult

Now to plug these into a Wu Xing Diagram to see the relationships these factions have with each other: 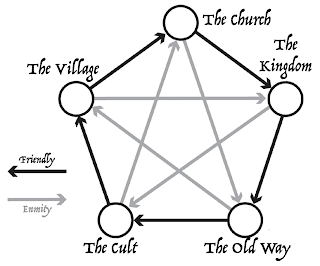 See what I mean about interesting relationships?


All of these goals point in exactly the same direction (the dungeon), but have varying reasons why the players would choose to go adventuring there. I would introduce each of the five factions through the NPCs found in T1:Village of Hommlet and reveal everyone's goal in terms of the dungeon. It would then be up to the players to determine the “why.” Which faction(s) will they support?

Of course, this choice is consequential due to the fact that various factions will now see the PCs as allies or enemies. Due to the larger goals of each faction, this will feed into further adventures.