Otus quotes Gygax as an introduction to the third week of this challenge, saying that it “is very difficult and time consuming.” Which is why, I believe, Otus has gone out of his way to simplify the process of creating a dungeon. While I understand why, his methodology deviates in many significant ways from my own, so this should be interesting.

The first task is to describe the entrance in 7-10 words. As someone who blogs, writing to 7 to 10 sentences is more in my wheel house; however, I appreciate the challenge of brevity. Sometimes it brings out creativity in a way that length does not.


A natural cave opening that looks like a dragon’s mouth.

I am sore tempted to write more, but the point here is to channel that creative spirit into the dungeon itself and to actually get the dungeon finished.

Step two is to draw out the dungeon, by which he means a simple point-to-point map. Here is my first real beef with Otus’ methodology; however, I must fully acknowledge that my beef is personal and not general. I don’t hate point-to-point maps (I tend to use them myself as a player when I am designated party mapper), but I find them next to useless in terms of dungeon design. The reason being that I am an (extremely) visual person. With a bunch of bubbles on a page connected by lines I have a really difficult time “seeing” the dungeon and how it works. Placing traps, monsters, treasure, etc. becomes an exercise in arbitrariness. I cannot begin to understand why those things exist where they do.

However, for the sake of demonstrating this process, here is the “bubble” map: 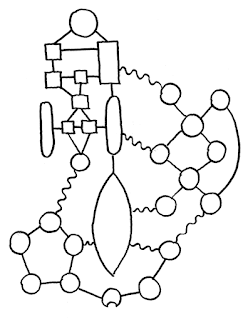 Admittedly, this is not my first draft. It is a copy of the map that best represents my final map. It just goes to show how much I struggle “seeing” this map…I had to draw out a full-blown dungeon map in order to be able to create an understandable point-to-point map!

Despite my problems with this step, I will actually use it in future — as a way of planning out the layout of my final map on a page. I tend to find ways to complicate maps because I like to have things in my dungeon that give players access to multiple dungeon levels in one go. I can trace the concept back to the side-view map of Stone Mountain in Holmes, except I like that shaft to have connecting points to all the other levels: 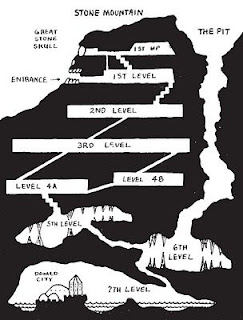 So, when trying to plan how to lay out a complicated map with three different levels all connected to a large chasm on a single page, I found this step to be kinda useful.

Otus calls for 1d6+6 rooms per level. While on the small side in terms of an Old-School aesthetic, it makes the prospect of creating a three level dungeon in short order doable. For the record, I rolled 9, 9, and 12 for the number of rooms. Due to the fact that I was struggling with the point-to-point mapping style and making it sync with my final map, I ended up with 8, 8, and 11 rooms plus the chasm which reaches all three levels. So, technically, I did 9, 9, 12 if you count the chasm as a room for each level…

Otus suggests having 1d3+1 ways up or down on each level. This is classic Old-School design. It provides players options when exploring and planning expeditions. This is especially important if there is something they wish to avoid that is preventing them from getting to a destination lower in the dungeon. On my “bubble” map, all the squiggly lines are elevation changes: 4 on the first level, 3 on second level, and 3 on the third level.

The next task is to come up with a theme for each level. Personally, this is of greater importance to me than anything up to this point. Again, as a highly visual guy, I have a hard time “seeing” the dungeon without knowing the theme before conceiving of the layout of the map. This was an impossible ask in my case, so I must admit, I did this first:

Otus also suggests creating a “budget” of 1d3+2 references to the theme for each level. This is the first time in this exercise where I have to vehemently disagree with Otus. While I understand the need for brevity in order to minimize how daunting this project can be, limiting the top end of references to the theme hamstrings the creative process and will make for a worse dungeon. One of the important features of Old School dungeons are empty rooms. They are an important feature to the aesthetic, but they can and will turn a dungeon crawl into a grind if they are simply empty rooms. Giving each a bit of flare by tying them into the theme of a dungeon level transforms the experience into actual exploration as the players try to piece together all these data points to paint a larger picture and understanding.

Thus, I would suggest that rather that placing an upper limit to the “theme budget” of each level, I would place a lower limit. This gives a designer the ability to minimally dress up the dungeon in order to get the process done quickly, but doesn’t limit imagination. I found myself completely shackled because most of my monsters fit the themes, blowing my budget. Thus, rather than spend time making my dungeon better by coming up with more ways to fit the themes, I wasted time trying to justify why the monsters didn’t reflect the themes. For the record, I rolled 3, 3, and 4.

This is turning into a really long post...so I'll stop here and continue the rest with my next post.