Week 4 of the Gygax 75 Challenge is dedicated to creating a Town. We finally come to a part of the process in creating a campaign that I personally rarely bother to do. For one, both T1: The Village of Hommlet and B2: The Keep on the Borderlands provide everything you need for a starting town for a sandbox campaign. Sure, I need to re-skin a few things to fit them into my world, but that pales in comparison to the amount of work I normally think necessary to make my own. Personally, the Village of Hommlet has been the foundation of my most successful campaigns.

In addition, even when I don't start with either the Keep or Hommlet, I rarely bother with creating shops or NPCs until the players specifically need or ask for them. This keeps my prep time down and allows me to play up elements of the campaign that are important to the players in the moment.

Those times I do go to the trouble is generally in context of an urban campaign, where part of the fun is exploring the city itself and the various factions and personalities that make that city into a character of its own.

That being said, I am looking forward to going through this part of the Challenge specifically because I normally don't. I am eager to see what fruits Otus' suggestions bear.

Step One is to find or sketch a map of the town. I really appreciate Otus' advice here. There are plenty of old maps and generators online that will produce a map that far outstrips what I can produce in a significantly less amount of time (and I have a graphic design background). So I found this online generator and popped out a map I liked the general look of. I took into my old copy of Illustrator and finagled a few things and produced this: 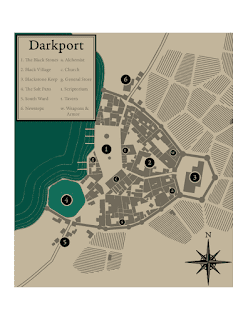 So, now that I have an inspiring map, I'll continue with creating the town in my next post.

Labels: B2 The Keep on the Borderlands, Gygax 75 Challenge, map, Village of Hommlet