Week two of the Gygagx 75 Challenge focuses on The Surrounding Area — the terrain around the beginning settlement and the dungeon. Otus points out that Gygax suggests:


...sitting down with a large piece of hex ruled paper and drawing a large scale map. A map with a scale of 1 hex = 1 mile ... will be about right for player operations such as exploring, camping, adventuring, and eventually building their strongholds. Even such small things as a witch's hut and side entrances to the dungeon can be shown on the map. The central features of the map must be the major town and the dungeon entrance.

To that end, Otus suggests getting a sheet of hex paper and drawing several features on it:


For the purposes of this exercise that is a really good start. Being someone who loves maps and has the graphic design experience and various computer programs to take advantage of those skills, I look at this and see a very sparse map. This is also where I am going to repeat some practical advice I gave earlier.

I knew I wanted an area with a lot of mountains, possibly a pass through those mountains to something dangerous on the other side. Having a frozen lake wouldn't hurt. Instead of trying to do all that myself, I leafed through an atlas. Two areas fit the bill nicely: Bhutan and Kyrgyzstan. While I think Bhutan more strictly fits what I was originally imagining, the map of Kyrgyzstan was too visually interesting to pass up: 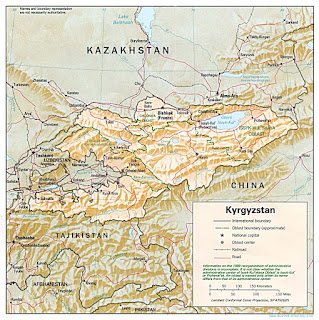 I flipped the map 90 degrees counter-clockwise and began placing all the features on the map: 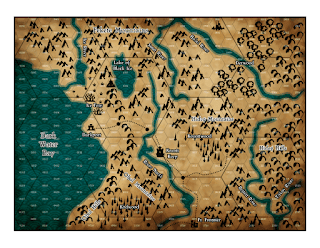 It should be quite obvious that I look some liberties. That is the point. Using a map helps ground the world in reality, and most of the geographical features will make sense; however, I wanted the area controlled by the Terran Empire to feel tinier and more isolated. Converting the plains in the southwest corner of the map into a sea accomplished that while following the geographic outline of the original. I also added some thorps and hamlets in between my two other larger Settlements and an extra mysterious site at the top of the map, representing the danger that lurks beyond the mountains.

As an aside, I did follow the 1 mile = 1 hex scale suggestion; however, I also included some larger 6-mile hexes to make things easier on myself if I ever decide to make a larger map with a  6 miles = 1 hex scale. I also added hex numbers. This makes the process of keeping track of various things on the map so much easier later in the preparation process, even well into a campaign.

Note: naming things is probably the most difficult thing for me when making a map. I'll usually do the following things to help out:


This will help develop a linguistic feel for your world and an easy method to come up with names on the fly in the future. For example, if the party stumbles upon  a village I haven't named, I can go to Google Translate type in "village" and out comes the new name of the place: Falu.

Don't be afraid to name things simply. For example, I named the river next to a lot of the settlements River North because it literally is the river people take to go north. Ft. Frontier is literally a fort on the frontier. Despite maybe sounding too simple, it is useful to name things by a descriptor to give players a sense of the world.

The Extra Credit of this second week involved "pimping" the map. I do that by default. In addition, there is the challenge of coming up with a simple Wandering Monster Table based on a 2d6 resulting in a range of 2-12 in a bell curve. In other words, whatever creature ends up at 2 or 12 is going to be very rare while those at 6 to 7 are going to be common. Here is mine:

Note: My monster list includes a number of non-standard monsters that are simply monsters that primarily exist in Moldvay (Pterodactyl is from Cook's Expert) re-skinned to fit the concept of my campaign world. This is another practical tip that I feel is often over looked: there are a ton of creatures in D&D that have nigh-identical stats but feel different simply because of how they are described. Re-skinning monster stats is a quick and easy way to create a bevy of new monsters without having to do all the statistical work. Just rename things, describe them how you want and go!

Also note: The number appearing is largely based on the Wandering Monster Tables in Moldvay. The two exceptions are the Skinwalker Overlord and Winter Witch. Moldvay gives a number appearing as 1d6, but I want these creatures to be very rare, so that even when encountered, there will only be one.

One thing that is missing from my WMT is something Otus suggests:


...include adventure hooks, like “Three goblins looting the corpse of a dead noble. Characters might recover the body and/or signet ring for a reward.”

I am not a big fan of these kinds of notes in connection to a random table, not because they are bad (adventure hooks and notes associated with various hexes are an essential parts of a sandbox campaign), but because they are not that useful to my style of play. Random tables are very capable of giving nonsensical results. When I am forced to find a reason why the result isn't nonsensical, that reason often ends up being a better hook than I ever could dream of in my preparation process.