Today is the Feast of St. Susanna the Deaconess. She was born in Palestine of a pagan priest and a Hebrew woman. After her parents died, she became a Christian and decided to pursue the ascetic way of life. She sold all that she had, cropped her hair, put on a man’s clothes and entered into a monastery. Assuming that she was a eunuch, the monks received her into their community.

She hid her identity for twenty years and even became the abbot of her community; however, a visiting nun became smitten with her (thinking St. Susanna a man). When her affections were rejected, she accused the saint of seducing her.

The local bishop (Cleopas of Eleutheropolis) was called along with a pair of deaconesses. St. Susanna revealed her identity to the deaconesses and her named was cleared; however, she could no longer serve in her monastery. The bishop, though, was so impressed by St. Susanna that he ordained her as a deaconess and she was appoined as abbess of a convent. She served there for many years, until Julian the Apostate came to power.

St. Susanna’s convent was targeted by the emperor’s persecution of Christians. She was arrested, tortured and thrown into prison. She died from her wounds in A.D. 362. 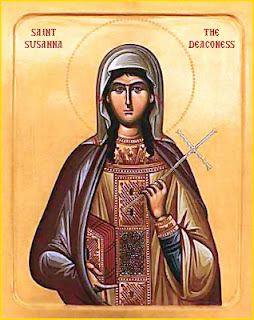 For those of us who are interested in running an FRPG campaign with a pseudo-historical Church (particularly if it is modeled on the medieval Catholic Church of the West), we are faced with the daunting task of telling players who wish to play a female cleric that they are not allowed. St. Susanna gives us a legitimate historical option.

As is obvious by this story, the early Church did ordain women, though only to the office of the deaconess. Historically, it seems that they functioned as normal deacons; however, St. Susanna's story also illustrates their primary role — ministering to women in those situations where it would be inappropriate for a man. For example, they performed baptisms of adult women (where the candidate was to be nude). As a result, they were mostly utilized in convents.

Unlike their male counterparts (who were allowed to marry prior to ordination), the canons of the ancient Church require that the deaconess be a celibate (or a widow). In addition, there was an age requirement — a deaconess needed to be at least forty years old.

The office was more widely used in the East, where it persisted into the 9th century. There are several historical reasons for its near demise (there are still local jurisdictions in the Orthodox Church who use the office for convents):


Despite this decline, those of us who want female clerics in an FRPG campaign with a Church analog can simply ignore or mitigate these factors to justify the existence of deaconesses, while never having to stray too far from historic reality.