Today is the feast of St. Marcellus the Abbot. Born in Syria, he was brought up in a rich family that provided for an excellent education. This led him to seek the monastic life. Around A.D. 460 he succeeded St. Alexander as the abbot of the Monastery of the Unsleeping Ones in the city of Constantinople. It was so called because St. Alexander had created a prayer rule where the monks took St. Paul’s exhortation to pray without ceasing (1 Thess 5:17) literally. They worked in shifts and when services were not being held, the Psaltery was chanted so that prayer never ceased while the monastery operated. 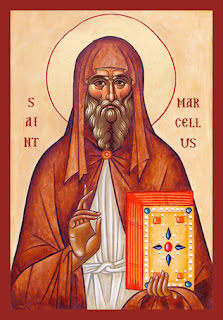 In terms of inspiration for an RPG, need I say it again?

The Monastery of the Unsleeping Ones

If that does not inspire a desire to go and try your hand at a megadungeon, I don’t know what will. For those of you who are uncomfortable with using a name of an actual monastery that produced saints, know that history has not only seen invaders close down the monastery, but there are plenty of examples throughout history of various governments aggressively destroying monasteries (King Henry VIII, for example).

When it comes to conflicts between church and state, monasteries have historically been hot beds of opposition. It is therefore a natural inclination of the tyrant to wipeout this opposition.

Thus, the back story of the monastery need only answer two questions and still pay homage to the original:


Answer these, and all one needs is a good map and a willing group of adventurers...