Today is the feast of St. Patapius of Thebes. He was born into an aristocratic family of Thebes in A.D. 380. They were faithful Christians and when the saint showed an interest in theology, they sent him to a catechetical school in Alexandria. There he came under the influence of a blind teacher named Didemus, who encouraged St. Patapius in his desire to pursue an ascetic way of life.

After the death of his father, St. Patapius went into the the desert where he became well known, so much so that people flocked to the desert to seek his advice. This began to distract him from his ascetic rule, so he fled the desert.

He spent seven years in Corinth at a skete in Geranian mountains and then went onto Constantinople, where he arranged to secretly enter the monastery of Blachernae where he was able to enter into a cell in the city wall. He spent the rest of his life in prayer, fasting and performing miracles in disguise as a simple monk. He died at the age of 83 in A.D. 463 and his relics remain incorrupt.

When Constantinople fell, his relics were moved to his skete in Corinth, where they were hidden in a wall behind the iconostasis (altar area) of a chapel built there. The relics remained hidden until the 20th century when a particularly tall priest needed some changes to the chapel to accommodate his height. He was visited by St. Patapius and was warned to take care when the wall was broken through, because, as the saint explained, he was there. Not only were the relics incorrupt, but the leaves that he was buried with were as fresh as the day they were picked. 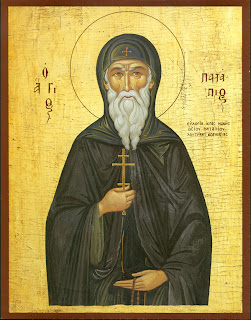 It seems that I am to continue meditating upon the campaign idea I extracted from the Prophecy of Nahum last week. If you recall, one of the potential ruins for the party to explore was the decimated city of No-Amon, also known as Thebes.

There are four themes that inspire me about the story of St. Patapius that I would like to use:


For purpose of fitting him into the Nineveh Campaign (as I suppose I would call it), since both No-Amon and Constantinople were conquered, it would be appropriate that the saint’s relics had been in No-Amon when it was sacked, but secreted out before the final destruction. Thus, the home base for the entire campaign can be either a monastery or a small keep in the mountains in the region of No-Amon and the saint’s relics are ensconced inside the walls.

This monastery could be famous for being the home of a wise man that many seek, but very few are able to actually see; however, there is a humble monk that is known to wander the streets and help those in need. Both, of course, are the saint.

This sets up an interesting mystery at the home base as well as a pair of potential patrons that the party could seek out and/or be recruited by (with both being the same person of course). I would look forward to the reveal of St. Patapius the Wise buried inside the wall — someone who had passed away years before the fall of the very ruin the party begins their adventuring career exploring.