This last installment of this series is for those who do not hear the high calling implied by the other organizations that fighters can be a part of.


Averoigne is sparsely populated and the ability of a noble to raise a decent sized army or maintain any kind of standing army is nigh-impossible. Mercenaries are a necessity for the protection of realm. The Mercenary Guild is officially recognized as an attempt to bring order to the process of hiring mercenaries and making sure that not only are the contracts fair, but that they are not broken. Unless a mercenary has earned the right to break a contract with good cause, all contracts must be carried out to the full before a mercenary may seek other work; however, all members are protected by the guild and if abuse is reported a noble loses the right to negotiate with guild members.

All mercenaries wear the symbol of a chain. This chain comes in two forms: broken and unbroken. The first is an indication that the mercenary is not currently under contract. The latter indicates that they are.


4. Bond Sword — A Bond Sword has the right to enter into a contract at the guild’s minimum wage. As a sign of their status, they may wear the symbol of a black chain.

5. Oath Sword — An Oath Sword has the right to enter into a contract and may negotiate the wage. As a sign of their status, they may wear the symbol of a silver chain.

6. Free Sword — A Free Sword has the right to break a contract for good cause (as is determined by the guild). As a sign of their status, they may wear the symbol of a gold chain. 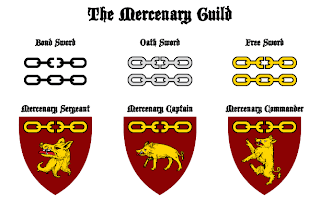 Like the Adventurer's Guild, these Level Titles are not exclusively for fighters; however (besides assassins) the majority of member are fighters.