This post is really just a note to myself, but it is intriguing enough that I thought I'd share. My dreams are at their most vivid early in the morning just prior to my waking. Last night I had one where I was a member of a party of adventurers traveling what was called the Gnomic Highway. 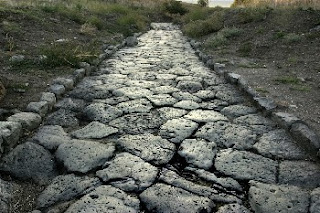 It was an ancient, abandoned and grossly dilapidated brick road, evidently built by gnomes. This strikes me as interesting because such things usually fall to ancient human or possibly dwarven civilizations. Having the road built by gnomes introduces the possibility of illusions, tricks and the fey.

Dotting this road were dungeons and lairs of various sizes, which inevitably led to a life or death battle with the undead. Being my dream, I was armed with a really cool sword which was quite effective against the likes of liches and skeletal warriors.

However, I note it here because the Gnomic Highway is a really interesting feature that one could drop into a campaign world. Because of its potentially fey origin, it could be a means of traversing large distances in very short order — if you knew how to get on and if you were willing to take the risk.

One of the most intriguing aspects of its existence is why and how it was built and why and how was it lost. It could be the back bone of an entire campaign and even push the boundaries of what a megadungeon can be.