Today is the feast of St. Anastasia the Great Martyr. She was born in Rome to a pagan father and a mother who was secretly Christian. As a result, her mother arranged for her teacher to be a Christian and she was brought up in the faith. After the death of her mother, her father arranged a marriage to a pagan.

Using one of her husband’s servants and his wealth, she dressed as a beggar and snuck into prisons in order to minister to the martyrs and confessors during the persecution of Diocletian and ransoming them when she could. The servant eventually told her husband who beat her and locked her up at home. Shortly thereafter, her husband died at sea.

She used her husband’s estate to give to the poor and continue her ministrations to captured Christians. She received the title Great Martyr because she was arrested and tortured several times. The first time, her torturer went blind and died. Out of fear, she was let go. The second time, she was left to starve, but received no harm. She was then sentenced to drown. Along with several other prisoners, she was placed in a boat with holes drilled into the hull. Through her intercessions, she and the other prisoners managed to get the boat to shore. Finally, she was captured, stretched between four pillars and burned alive. 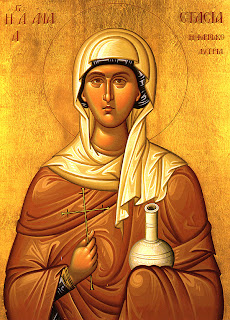 Note the fact that St. Anastasia is depicted holding a bottle. Though her life is quite inspiring (especially when one reads a fuller account which includes some of the names of the martyrs she ministers to), the aspect of her story that fascinates me the most is a secondary title she has received as a result of the miracles worked through her relics — ἡ Φαρμακολύτρια, which literally means the one who ransoms or delivers from potions or poisons and is most often translated as The Deliverer from Potions.

In context of a typical D&D campaign, such a title seems odd since the vast majority of potions are beneficial. Indeed, until the release of Unearthed Arcana (which adds the Elixir of Madness, Oil of Fumbling and the Philter of Stammering and Stuttering) there were only two detrimental potions available: Delusion and Poison. Even then, if one used the random tables found in 0e, there is only a 2% chance of a potion being Delusion and a 4% chance of being Poison. This percentage doesn’t change much when one looks at both B/X (7% and 2% respectively) and AD&D (3% each).

The exception to this pattern is found in (where else?) Holmes. Twenty percent of all potions are either Delusion or Poison (at 10% each). Along with St. Anastasia’s moniker, this suggests an interesting alternative on how to handle potions in a D&D campaign.

One of the frustrations that I have as a Referee running LL is that there is no easy way to handle potions. One either has to keep detailed notes about each and every potion — noting how each is colored and smells, for example (something that I am not at all good at) — or allow players to take a sip and determine what the potion might be. Even if an Identify spell is available (as it is when my group plays AD&D), it seems like such a great waste to use it on a potion. As a result, my use of potions is not nearly as satisfying as I want it to be — especially since I have a bunch of players who regularly use potions when they are available.

What if Magic-Users could automatically identify arcane potions and Clerics could automatically identify divine potions due to their training? Or, if one wanted to cleave closer to Holmes, only Magic-Users could identify all potions. The way to make their use dangerous is to get rid of potions that are specifically Delusion and Poison (and Madness, Fumbling and Stammering) and to give every use of a potion a 20% chance of having a negative side-effect. A table could include the following:
*Suggested curses can include: Whenever someone fumbles (friend or foe) the cursed character fumbles instead; Henchmen automatically fail their morale check and the character becomes the prime target for all monsters.

This would then create a niche for magical items that protect characters from the negative side-effects of potions. For example:

This silver amulet has an icon of a saint holding a potion. When worn, it reduces the chance of a potion having a negative side effect to 10%.

All of this makes potions a lot more exciting and (more importantly for me) easier for both the Referee and the players to keep track of.