Today is the feast of St. Innocent of Alaska, also known as Equal-to-the-Apostles and Enlightener of Alaska. He was born in the Irkutsk region of Russia where he studied at seminary. He married, became a deacon and later a priest. When missionaries were needed to go to Alaska, he and his family volunteered.

After arriving in 1824, St. Innocent realized he had a gift for languages and shortly mastered six of the local dialects and even translated the Gospel according Matthew into the most wide-spread dialect — the Unagan of the Aleuts.

After his wife died, he was tonsured a monk and ordained as a bishop. Eventually he was elected as the Metropolitan of Moscow in 1867. He died 12 years later in 1879. 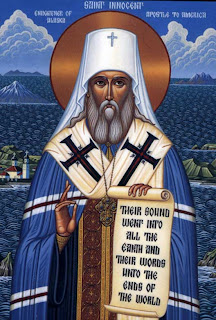 This marks the third Saintly Saturday post dedicated to various American saints who made their mark in Alaska. Each time, it has inspired me to work a little more on one of my Gamer ADD projects — a fantasy campaign world based upon this period of Alaska.

As I have stated before, I would likely use B/X or LL as my base rule set; however, due to the nature of the setting I would have to do some heavy house ruling. I thought I would take advantage and summarize some of the ones I have come up with so far:

A fantasy setting set in 18th century frontier Alaska, unfortunately, needs to have firearms. Both colonial powers involved in this region of the world rely heavily on black powder. Therefore, I need to come up with a way to make them interesting without overpowering them; however, they will be much more expensive than standard weapons (I am thinking by a magnitude of around x10).

The main way I intend to simulate firearms is to have armor reduce damage rather than making a PC harder to hit. What is traditionally called AC will, in fact, be a target number based on a PC’s Dex score. Heavier armors reduce the maximum effective Dex score — plate armor will make you easier to hit, but tougher to damage.

Firearms don’t do any extra damage; however, they can ignore DR depending on the size of the weapon. This realistically simulates why armor eventually gets abandoned.

As per the B/X and LL rules there will be the three standard armor types:

At the moment, I am inclined to not include shields because they had largely fallen out of use by this time.

Since this world does involve touchy subjects like colonialism, nativism and a missionary church, I am much inclined to dump the traditional D&D alignment system for one that harkens back to the days of Chainmail. In other words, there will be three different sides that PCs can choose to align themselves with — Ruthenia, with its claim to be the Third Rome and their close association with the Church (roughly akin to Lawful); Albion, with their claim to be the most powerful empire in the world, mostly due to their use of arcane science and possibly a few demon pacts along the way (roughly akin to Chaos); and the Natives who may or may not cooperate with the two colonial powers (roughly akin to Neutral).

Since this setting sits at the cusp of the industrial revolution, I want all magic to have a pseudo-science feel to it. Arcane spells are akin to devices powered by hellfire or bound demons. Divine spells are akin to objects powered by the breath of angels. Native magic will be akin to alchemy using the natural ingredients passed down through the generations. Found magic will most likely be ancient alien technology.

This may have some significant affects on how spells function. For example, I am inclined to have CLW function as it did it 0e — it takes one full turn to “cast.” Rather than being a miraculous healing during combat, it is the bandaging up with various medicines after combat.

There will be humans only; however, that doesn’t mean I won’t be using the race-as-class abilities of demi-humans — they’ll just be recast as humans (see below).

I am seriously considering having different versions of each of the three core classes based on alignment. I say three because I don’t want to mess with the Thief. I am inclined against the class in the first place and (at least at the moment) can’t think of a good way to make it fit thematically.

Here are some initial thoughts:

The base fighter will be available to all alignments. There will be specialized versions, however: