I've slowly been making progress on my re-imaging of A1: The Slave Pits of the Undercity. Below you will find a finished map for the general area of the Slave Pits — a place known as Hucwind Island (for the astute reader, yes, that is a rearrangement of the name Dunwich — from one of my favorite HPL stories): 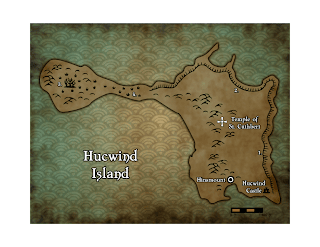 As I predicted in my initial thoughts, this map is based on the island of Lindisfarne, the place where the real St. Cuthbert is from. It is approximately 2.25 miles wide and 1.5 miles deep.

There are three stages of habitation/development:

Here is a key for the numbered areas: