When I put together the Wandering Monster Tables (WMT) for a FF Basic Edition, I promised to find a map and stock it using those tables. At the time, I had in mind the maps of Dyson Logos, whose hand drawn maps have found their way into my games on more than one occasion and also spearheaded the geomorph revival that gets put to such good use over at Dave’s Mapper. Unfortunately, Dyson’s recent output has been rather sparse and can usually fit on a 3x5 index card. Undaunted, I decided to string together several of his recent maps to produce a large enough map to really give my WMTs a good test run. I had to fiddle with the maps a little in order to make them fit, but here is the result: 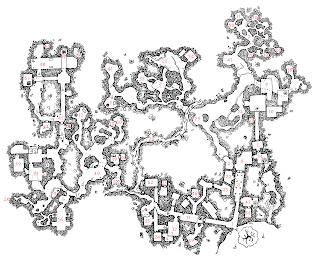 I used the dungeon stocking table from Moldvay with one addition. Holmes provides a table that allows wandering monsters from tables above or below the current dungeon level. Since I had WMTs for levels 1-3, I wanted to take advantage of them all and so utilized this table from Holmes.

Here are the results (with initial thoughts in parentheses):

The fun part of this whole exercise is that this dungeon doesn’t feel all that different from a classic sample dungeon for a Basic Edition — its a pair of Magic Users who employ some evil humans and humanoids as guards. However, all the various familiar elements are twisted just enough to be unfamiliar and therefore dangerous. I especially like how the demi-human stand-ins (Dakon, Kenku and Quaggoth) don’t necessarily seem out of place or are automatically an encounter that will help out an adventuring party.

EDIT: Since there has been an interest, the map above is now a larger version and I am including this version sans numbers: 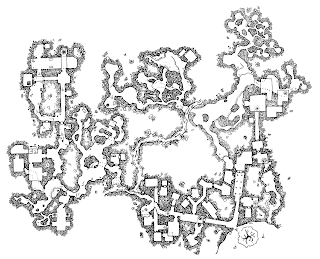