I am going to break pattern today. Although it is the feast of St. Quadratus and his companions who were martyred at Corinth, Conrad of Joy and Forgetfulness asked me this week for my thoughts on the Archangel Michael. 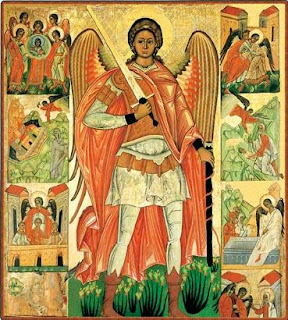 As I mentioned when I wrote about the Archangel Gabriel, the word angel means messanger. This is indicative of one of their primary purposes, exemplified by Gabriel who is the messenger par excellence; however, angels also protect — as indicated by the existence of guardian angels. Michael is the protector par excellence.

In Scripture, he is explicitly mentioned in:


By tradition, however, his first appearance in Scripture is in Joshua (5:13-14) as the man standing in front of Joshua with a drawn sword in his hand. When Joshua challenges him by asking what side the man was on, the archangel responds:


neither…but as the commander of the army of the Lord I have now come.

This is the origin of his title Archstrategos or Chief Commander.

The Church Fathers have also equated Michael with the following:


On the Greek island of Symi there is a miraculous icon of the Archangel that has a pair of traditions associated with it.


According to the Hagiography of St. Mercurius, the archangel appeared to the saint to give him his sword. 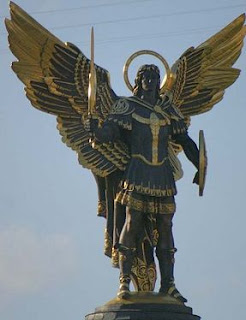 The Archangel Michael is actually one of the reasons that I feel completely comfortable with the idea that D&D is compatible with Christianity. Often depicted in armor and wielding a sword or a spear, Michael is a reminder that the life of a Christian is spiritual warfare. We are constantly being assailed by temptations and, from an Orthodox Christian perspective, the devil and his angels. Every day we must gird ourselves with the Lord and go into battle, because sometimes the spiritual bleeds into the physical (just ask St. Quadratus and his companions).

As I have stated many times before, FRPGs and D&D (in its older forms in particular), make excellent metaphors for this spiritual warfare. Monsters are sins personified. Demons walk the earth in physical form. PCs represent (Christian) Civilization as it goes to battle with the (Demonic) Wilderness.

Of particular interest to me is the endgame of (older editions of) D&D. PCs are expected to carve out a piece of land, clear it out and build a stronghold — reclaiming a portion of Wilderness and making it safe for Civilization. This manifests, in game form, the great reclamation project of Christ and His Church. Christ did not become a human being just to save humanity, He came to save all of creation. As His royal priesthood, the Church endeavors to sanctify and restore creation — to properly orient it towards God.

In his role of protector and his multiple battles with the devil and his angels, the Archangel Michael personifies this aspect of D&D. An aspect I continue to explore and present in both this blog and the way I play the game.

Though these brooms appear to be normal, mundane items (although many might have a cross carved in the handle), they radiate of divine magic. They may be used to ask favors of the Archangel. Whenever such a boon is requested, two dice are rolled instead on one for the next roll a player makes. They are then allowed to take the result of either die.

This boon, however, requires an offering. Most often, the broom itself is offered and in such cases it will turn to dust. Other offerings may be made it the broom’s place. Anything of value (a level to be determined by the Referee) may be substituted. Such substitutions will turn to dust.

If a boon is asked, but no offering is forthcoming, the player must roll two dice for everything and choose the most detrimental result until something is offered.