Today is a convergence of two significant events, at least for those of us of an age who dabble in this singular hobby of ours. I am in good company with those who were introduced to the world of RPGs by Dr. Holmes’ edition of D&D. Today, of course, marks the anniversary of his death. How apropos that today is also the feast day of St. Cuthbert, that oft misunderstood saint who has been with us as part of our hobby since he was first mentioned in passing in Supplement 3: Eldritch Wizardry.

Since I have been dabbling with re-imaging the Slave Pits of the Undercity on an island once occupied by the followers of St. Cuthbert, I have been doing some research on various relics that might show up somewhere within the confines of the Temple once dedicated to the saint. There are two that inspire (sorry, neither of them are a mace). One is unique and the other is a type of item that could potentially be found or made in greater quantity. In honor of today’s feast and today’s loss I’d thought I would share.

For hundreds of years, the body of St. Cuthbert remained incorrupt. There are multiple accounts about how his joints were still subtle and how the items found on his body were as fresh as the day that they were made. One of these accounts noted that when his tomb was opened in 1104, therein was found a pocket-sized Latin translation of the Gospel According to St. John, which is now in possession of the British Library. 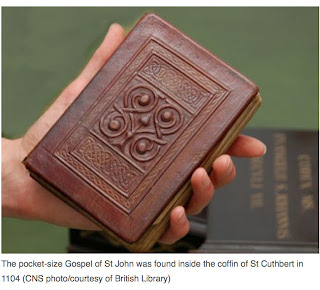 In a campaign that includes St. Cuthbert, this relic could miraculously produce pages within that function as cleric scrolls. When used to pray for spells, St. Cuthbert’s Gospel Book produces a number of spell-pages equal to the number of spell levels the praying cleric can cast. These spells are determined randomly and will remain until cast appropriately. Only one page per spell level will appear within the book.

The monks of Lindisfarne would make prayer ropes, necklaces and rosaries from crinoid fossils — the stalk of ancient sea lilies. These would either wash ashore or be exposed in the rocks around the island. The monks believed that St. Cuthbert would forge them out of the rocks at night so that the monks could find them the next day. They came to be known as St. Cuthbert’s Beads. 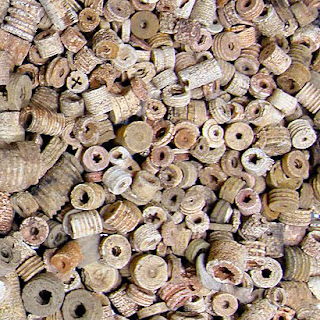 Sir Walter Scott makes mention of this in his poem Marmion:


But fain Saint Hilda's nuns would learn
If, on a rock by Lindisfarne,
Saint Cuthbert sits, and toils to frame
The sea-born beads that bear his name:
Such tales had Whitby's fishers told
And said they might his shape behold,
And here his anvil sound:
A deadened clang - a huge dim form
Seen but and heard when gathering storm
And night were closing round.
But this, a tale of idle fame,
The nuns of Lindisfarne disclaim. (canto 2, verse 16)

For my purposes, I definitely plan to have a version of these beads in my own campaign. I will also scatter several across the island of Hucwind. They radiate of magic, and the larger ones will have either crosses or a short prayer carved into them. With apologies to Sir Walter Scott, it might go like this:


On a rock by Hucwind, St. Cuthbert sits, and toils to frame the sea-born beads that bear his name.

If one or more is in the possession of one who recites this prayer, they will be the recipient of a Sanctuary spell. This may be done three times per day and the spell lasts one round for every bead strung together on a prayer rope or necklace.