Today is the feast of St. Andrew the Commander. He was a roman soldier during the reign of Maximian. About the year A.D. 289 he was sent by Antiochus, the Commander-in-Chief of the Roman forces, to fight off a large Persian army that had invaded the Syrian territories. Interestingly, St. Andrew had not yet been baptized a Christian, but still persuaded his men that the pagan gods were merely stone carved by human hands and were of no help in the upcoming battle. In contrast, all things were brought into being through Jesus Christ the omnipotent God of heaven and earth. Therefore, all his men, believing that Christ would give aid to all who believe in him, called upon the help of Christ. Though greatly outnumbered, St. Andrew’s men routed the Persians.

When it was discovered that this victory was done in the name of Jesus Christ, St. Andrew and his men were put on trial by Antiochus. When they confessed Christ they were tortured: St. Andrew was placed on a bed of hot iron and the hands of his men were nailed to block of wood. They were then chased through the streets by soldiers. In the end, these men, too, came to believe in Christ because they saw the strength of St. Andrew’s faith and listened to his teachings.

After seeing the folly of these tortures, Antiochus had them all beheaded: St. Andrew and 2,593 soldiers. At the spot of their martyrdom, one of the passes of Mt. Tauros in Cilicia, a spring come forth from the ground. It was soon discovered by the local Christians to have healing properties.

As a player, one of the things I enjoy most in an RPG is being surprised by my character. I allow the events of a campaign to shape them and inform their decisions as they advance in levels and/or power. For example, I was playing in a campaign that had a desecrated temple of St. Cuthbert sitting atop the Caverns of Thracia. I joined the campaign late and ended up playing an NPC turned PC.

Over the course of the campaign, the group managed to finally (and unknowingly) cleanse the temple of St. Cuthbert. Ironically, my character had failed a saving through and therefore was fleeing. Therefore, my character was the only PC to witness a divine light bathe the temple leaving behind a set of Bracers of Defense.

The fear left my character and he took up the bracers in awe. I decided that my character would see this event as a command to wear the bracers for the rest of his career and that he would become a devout follower of St. Cuthbert. Thus, by a random event, my fighter-type character ended up religiously wearing a magic item primarily designed for magic-users. This event reminds me very much of the story of St. Andrew and his soldiers. They allowed a single event to radically change their lives.

Fortunately, it was a 1e D&D campaign, therefore I had the freedom to choose this path for my character without crippling him.

In the wake of Paizo’s release of Starfinder, I am getting buried under a bunch of promotional material about various companies releasing support material for the game. I have to be honest, here: I have zero interest, despite the fact that my Gamer ADD is now focused on producing a 4-page ruleset for a sci-fi RPG. The reason I don’t have any interest is, again, related to the story of St. Andrew.

The 3.5 engine that drives Pathfinder and Starfinder gives off the aura of having a plethora of options for its players. Unfortunately, this is largely an illusion. The game assumes a certain amount of min/maxing and optimization by its players as their characters advance in levels. This cam be seen in the way monsters are handled at higher levels. Thus, the game itself punishes players who do not follow a pre-determined set of paths for advancement. Without optimization, a character can very quickly become unplayable and even a danger to the rest of the party. Thus, a character is expected to advance and develop in a particular fashion despite what happens in a campaign. Paizo even has The Pathfinder Strategy Guide, a book entirely dedicated to strategies of planning out how to optimally advance a character. Everything is planned out. There are not supposed to be any surprises. 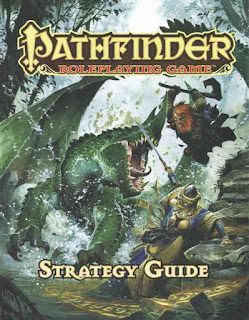 I have experienced this on more than one occasion, where I chose to follow the logic of the events in a campaign rather than The Strategy Guide optimization. My characters would end up being less and less effective in play compared to those who had panned out their characters and the campaign became less and less interesting to me and I became more and more frustrated. While I understand and appreciate the min/max impulse in games, it best belongs in the realm of war-games, not RPGs.

I believe that if St. Andrew were a 3.5/Pathfinder character he and his men would never have chosen the path of Christ, because it wan’t optimal to their career choice; however, it makes sense in context of the events they actually experienced. Allowing PCs to freely make similar choices without systemically punishing them for doing so is not only more realistic, it’s also more fun: we get to be surprised by how the campaign world affects our characters as much as our characters affect the campaign world.