Those who are familiar with my blog know that I suffer quite often from Gamer ADD. When I come to a point in a project or a campaign where there is either grueling grunt work (as with my Portown project) or a logical/practical dead end, my mind has a tendency of going off into the woods. Most of the time I can’t help myself because one of the of the aspects of RPGs I love the most is the creative process, both at the table and beyond the table.

Various folks have been blogging RPGaDAY2017 this month. While I am both too busy and not inspired enough by the prompts to bother myself, it did remind me of one of my all-time favorite RPG covers, if not my favorite RPG: 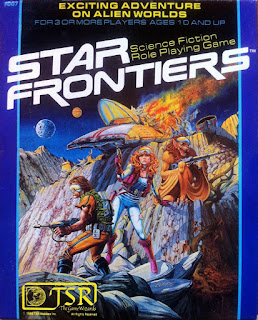 Unfortunately, Star Frontiers never really lived up to the expectations inspired by that cover. It doesn’t do hard science fiction as well as Traveller and doesn’t do space opera as well as Star Wars d6; however, it does invite me to try something that just might drive my creative self a little bit crazy. It has two sets of rules: one called “Basic” and the other called “Expanded.” The Basic rules were about 20 pages but were really only a glorified war game. The idea of a Referee was only introduced in the Expanded Rules.

Given that I have long believed that D&D is actually one of the most successful sci-fi RPGs ever to be published, given that I have really fallen in love with the magnificent simplicity of Swords & Wizardry Light and given that Star Frontiers originally had a simplified version of its rules, my Gamer ADD wants desperately to take Swords & Wizardry Light and marry it with concepts from Star Frontiers to create a version of the game worthy of the cover art.


Colossi of the Empire of a Thousand Suns.

At the height of human space exploration, the Empire of a Thousand Suns came upon the edge of space, beyond which was only darkness. To the peril of all who drew near, all that came out of what would become known as the Outer Darkness were monsters and demons. Thus, the Empire built the Colossi: giant sentinel ships and robots to guard all sentient species from the ravages that emerged from the Darkness.

That age has long past. The Empire is only a shadow of itself, monsters freely roam space and the Colossi float in ruin. Today, adventurers of all stripes dare to explore these hulks at the edge of space: Crusaders of the Holy Sacherdotsi, Mind Mages from the Halls of Ancient Knowledge and Warriors from battlefields both primitive and technological. Some seek fortune and glory, some pine for the treasures of a more venerable age, and some dare to drive the Darkness back from whence it came.