Today is the Feast of the Holy Martyrs Adrian and Natalie. One of the things I love about studying the lives of the saints is the realization that these people come from all walks of life from all around the world. Sts. Adrian and Natalie were a young married couple who lived during the reign of Maximian. Adrian was a pagan and Natalie was a secret Christian. Maximian was persecuting the Christians and they each were brought before the Praetor so that their names and responses could be recorded. Adrian was serving in the praetorium and witnessed Christian after Christian refuse to denounce Christ even though it meant a horrible death.

Finally he asked them why, and they responded that the rewards that awaited them for their suffering were beyond the human’s mind’s capacity to understand. In a moment of clarity, he presented himself to the Praetor and declared himself a Christian. When his wife Natalie heard the report that he was in jail, she ran to visit him and then rejoiced when she found out the reason why.

Through all the tortures, she encouraged her husband to hold fast to his newfound faith. Finally, the emperor gave up trying to convince St. Adrian and those Christians imprisoned with him to denounce Christ, so he ordered their death. The executioner ordered that all their legs and hands be smashed off on an anvil. Fearing that her husband would waver seeing such cruelty demanded that he be first going so far as to hold St. Adrian’s hands upon the anvil. As a consequence, she was able to abscond with one of his hands which she preserved as a relic. She fled to Argyropolis near Byzantium (which would become Constantinople) where she died shortly thereafter. 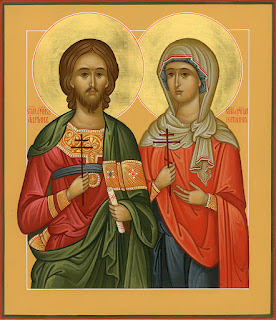 This is a rather grim tale that probably does not make much sense to most modern minds. In fact, I may very well have squeamishly ignored this story had I not have had to go through with the last several years of my life. One of my children has had to have multiple surgeries and countless painful procedures to keep her alive. By the grace of God, she is doing well, but I can tell you the only reason I could endure seeing (and some times helping) my own child go through that kind of pain was the knowledge and the hope that life and healing could only happen through that excruciating pain.

It is in this context that I completely sympathize with St. Natalie and what she had to go through encouraging her husband to endure torture and death to the point of aiding the executioner. This was her chance to see her beloved gain not just hope and life, but the eternal life offered by our Lord, God and Savior Jesus Christ. If anyone would come after me, let him deny himself and take up his cross and follow me. — Matthew 16:24


These life-size hands are partially encased in bronze and attached to a chain that allow someone to wear them around the neck. The hands have a variable appearance according to the alignment of the viewer. A Chaotic will see a diseased and rotting hand, a Neutral will see a hand made of bronze and a Lawful will see a living hand that softly glows.

Chaotics who touch the Hand must make a Save vs. Death or suffer the effects of a Cause Disease spell. For Neutrals, the Hand is nothing more than piece of jewelry. When a Lawful character places the hand around their neck, they are bestowed with one of the following powers (roll a d20):

If a Lawful character should wear two of these Hands at the same time, the two come together as if in prayer and the wearer has the spell Prayer cast upon them permanently.