Today is the feast of St. Gregory of Neocaesaria the Wonderworker. He was a well-educated son of pagans who converted to Christianity. Around A.D. 240, he was elected as bishop of his hometown (modern-day Niksar, Turkey). Rather than go on, I am going to do something that I don’t often get to do — quote a saint about another. In his masterpiece On the Holy Spirit, St. Basil the Great uses St. Gregory as an example of a highly regarded early Christian who used the formula “in the Holy Spirit:”


But where shall I rank the great Gregory, and the words uttered by him? Shall we not place among Apostles and Prophets a man who walked by the same Spirit as they; who never through all his days diverged from the footprints of the saints; who maintained, as long as he lived, the exact principles of evangelical citizenship? I am sure that we shall do the truth a wrong if we refuse to number that soul with the people of God, shining as it did like a beacon in the Church of God; for by the fellow-working of the Spirit the power which he had over demons was tremendous, and so gifted was he with the grace of the word “for obedience to the faith among…the nations,” that, although only seventeen Christians were handed over to him, he brought the whole people alike in town and country through knowledge to God. He too by Christ’s mighty name commanded even rivers to change their course, and caused a lake, which afforded a ground of quarrel to some covetous brethren, to dry up. Moreover his predictions of things to come were such as in no wise to fall short of those of the great prophets. To recount all his wonderful works in detail would be too long a task. By the superabundance of gifts, wrought in him by the Spirit in all power and in signs and in marvels, he was styled a second Moses by the very enemies of the Church. Thus in all that he through grace accomplished, alike by word and deed, a light seemed ever to be shining, token of the heavenly power from the unseen which followed him. To this day he is a great object of admiration to the people of his own neighborhood, and his memory, established in the churches ever fresh and green, is not dulled by length of time. Thus not a practice, not a word, not a mystic rite has been added to the Church besides what he bequeathed to it. Hence truly on account of the antiquity of their institution many of their ceremonies appear to be defective. For his successors in the administration of the Churches could not endure to accept any subsequent discovery in addition to what had had his sanction. Now one of the institutions of Gregory is the very form of the doxology to which objection is now made, preserved by the Church on the authority of his tradition; a statement which may be verified without much trouble by any one who likes to make a short journey. 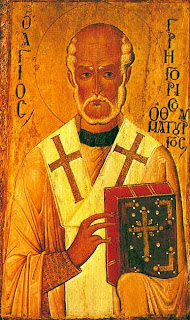 I would like to point out that St. Gregory’s witness, though powerful enough to the local Christians that they had refused to change anything in their liturgical life for well over a century, their practices were different from other local Churches. Note also that St. Basil had no real issue with this reality (as long as the dogmatic core of what was being taught and worshipped remained consistent).

If you would indulge me, I would make the case that the Church of Neocaesaria is a bit like that segment of our hobby that plays OD&D. I would argue also that there are certain principles found in OD&D that can be found in later iterations of the game that remain consistent despite all the rule changes and development of the hobby, just as St. Basil found himself on the same dogmatic foundation as St. Gregory, despite the differences in form.

When 4th edition came out, there was a lot of discussion about what D&D is, because the form had so radically changed that there was a question as to whether or not the principles that had allowed all of us to say, “I play D&D” (regardless of what ruleset we used) still existed. Although there had already been a move toward older styles due to the soul searching that followed Gygax’s death, I firmly believe that the existence of 4e accelerated the depth and the breadth of this exploration.

The fourth century in Christian history had a very similar pattern. There were a number of theologians deeply influenced by philosophy that started doing and saying things that were far enough away from what had come before, that the Church had to ask the question “What is Christianity?” Their answer is recorded in the dogmatic statements of the Ecumenical Councils.

What is fascinating about this history, however, is that those very same councils would use words and forms that were never used by Christians before them in order to defend what had come before. In other words, they borrowed things from their contemporary milieu, re-applied what had come before into this new-milieu, and came out stronger.

It is here that I need to quote Robert Conley:


To me the Old School Renaissance is not about playing a particular set of rules in a particular way, the dungeon crawl. It is about going back to the roots of our hobby and seeing what we could do differently. What avenues were not explored because of the commercial and personal interests of the game designers of the time.


We live in a new milieu. It is no longer the 1970s. Our cultural and technological landscape is radically different. What Robert is suggesting is that we take the principles of our hobby as they existed in the 1970s and re-apply them to our current reality. What we might end up with may very well look different from OD&D, but our hobby today is going through a golden age because of this process of re-applying what we learned from the hobby as it was in the 1970s.

For example, player freedom, agency and creativity are core principles that I insist upon. In my own experience, the best way that these get expressed is within the context of an abstract combat system. My recent musings on some of the shortcomings of this abstraction, however, resulted in a few folks reminiscing about how glad they are that they no longer play that way. Indeed, Robert himself prefers a far more concrete form of combat simulation (but acknowledges that the trade-off is far more time spent in actual simulation).

This is a pattern found in the 1970s, when several folks moved away from the D&D abstraction towards a more realistic model — because that realism was a core principle that they found important enough that they changed the way they played the game.

The beauty of our current situation is that we have all of the history to go back to and see how it was done before and what resulted from certain choices in game-style and rule-set. We, because of our milieu, now have the freedom to go back and tweak these choices and explore how other choices impact the way the hobby is done. And we are stronger for it.