Today is an intriguing local commemoration within the Georgian Orthodox Church — the Martyrdom of St. George the Great Martyr and Trophy-Bearer. The country of Georgia has a very special relationship with St. George, who is normally celebrated on the day of his death: April 23. This relationship begins with St. Nino Equal-to-the-Apostles and Enlightener of Georgia (a woman, by the way). She was a relative of St. George and was intimately familiar with his story. 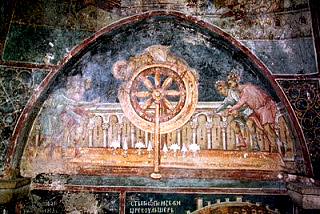 She set aside today as a special commemoration of St. George, remembering his torture on the wheel. Historically, a victim of the wheel was tied across the spokes and a hammer was used on the limbs of the victim in-between the spokes. This made it easier to break bones. Victims would be left exposed and would die of dehydration, shock or a combination of the two. 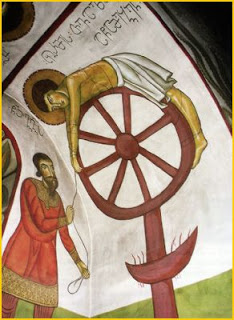 Through St. Nino, St. George became a patron saint for the whole nation. A patron saint is a saint with whom a nation, organization, family or individual has a special relationship in which the saint is seen as a special protector and whom prayer is especially dedicated to. As a result of Georigia’s relationship with St. George there are churches and chapels dedicated to him all over the country (especially in villages). Almost every day of the year, there is some sort of dedication to St. George related to the building of a church or chapel, or a miraculous icon.

It is this ubiquity that intrigues me, and is something that can be easily incorporated into an FRPG campaign. Rather than overwhelm players with a plethora of saints, have one saint (or possibly a few) that play the role of patron for an entire region. This could manifest itself through play in a number of ways:


In other words, with very little effort, an entire region of a campaign world can come alive and have a depth of character simply by telling the story of a saint.

For example, in my pre-blogging days, one of my Gamer ADD projects was a pseudo-Christian campaign world to take advantage of several Goodman Games modules I own. The small region that was to be the focus of the campaign had been invaded by an evil army and the local rulers (four of them) were asked to surrender. Part of this meant denouncing Christ. They refused and where turned to stone. Miracles started happening in the vicinity and allowed the locals to push the invaders out of their little valley.

Colloquially they are called The Four Saints or simply The Four. They still stand petrified where they were originally turned to stone (though they have been known to change over time). One of the ways this patronage plays out in the local culture is that it is considered bad luck to sell anything in anything other than a factor of four. Thus, livestock is sold by the hoof rather that the head.

This sort of thing doesn’t have a major impact on the mechanics of the game, but it does give the players a chance to immerse themselves into a campaign world with something simple and relatable.