Today is the feast of St. Clement of Rome. According to the list of bishops given to us by both St. Irenaeus and St. Hegesippus, Clement was the third bishop of Rome. He became a Christian through Sts. Barnabas and Peter. Under the reign of Emperor Trajan, St. Clement was first sentenced to hard labor (where he found and ministered to many Christians) and then drowned by having an anchor tied around his neck about the year A.D. 100. 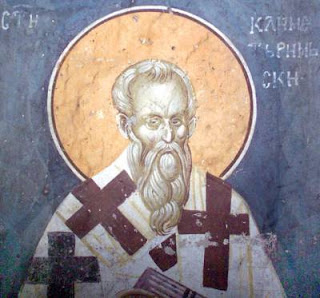 His legacy includes two Epistles written to the Corinthians. According St. Dionysius of Corinth, these letters were publicly read on Sundays in the church. Intriguingly, this means that these two Epistles were part of the discussion in the early Church as to what should be included in the New Testament canon. In my own experience, I have found that many do not realize that the NT as we know it was not formally recognized until the 4th century. Indeed, the earliest NT writings first appeared more than two decades after the crucifixion of Christ.

This, of course, is soil ripe for folks to claim that certain books were suppressed while others were forced upon Christians and other conspiracy theories about how the NT came to be. The Epistles of St. Clement, however, demonstrate a couple of important factors. First and foremost, the books of the NT were written by Christians for Christians and it was Christians who determined what stayed and what didn’t. Secondly, due to the fact that Clement’s letters did not make the cut despite being accepted as good and right (they were read publicly in church), the criteria for what stayed and what didn’t had two factors:


Clement, being the third bishop of Rome was too far away from the Apostles to make the cut.

His letters, though, are a very interesting read — particularly the first. It is replete with Scriptural quotes, focuses primarily on ethical behavior (something of a trend with early Roman Christians) and integrates Hellenistic thought. The most intriguing example of the latter (and most useful in terms of an FRPG) is the 25th chapter:


Let us consider that wonderful sign [of the resurrection] which takes place in Eastern lands, that is, in Arabia and the countries round about. There is a certain bird which is called a phœnix. This is the only one of its kind, and lives five hundred years. And when the time of its dissolution draws near that it must die, it builds itself a nest of frankincense, and myrrh, and other spices, into which, when the time is fulfilled, it enters and dies. But as the flesh decays a certain kind of worm is produced, which, being nourished by the juices of the dead bird, brings forth feathers. Then, when it has acquired strength, it takes up that nest in which are the bones of its parent, and bearing these it passes from the land of Arabia into Egypt, to the city called Heliopolis. And, in open day, flying in the sight of all men, it places them on the altar of the sun, and having done this, hastens back to its former abode. The priests then inspect the registers of the dates, and find that it has returned exactly as the five hundredth year was completed.

So, Clement gives us inspiration for a fantastic creature (the phoenix), its life cycle (which includes a larval stage) and an adventure — retrieving the bones from the city of Heliopolis. This presents a couple of interesting possibilities:

First, what if a the phoenix were an insect rather than a bird? This would explain the 500 year life cycle (an exaggeration of the 7-year cycle of the cicada), the worm-like larval stage (found in all kinds of insects) and (though Clement does not mention it) even the mythical fire of the phoenix (there are several insects that produce nasty chemical cocktails for self-defense). The “bones” in question could very well be the shedding of the outer shell as the phoenix emerges into its adult state.

Second, the adventure in question could very well be something of a competition or race. The value of the phoenix bones would have to be very high (are they a key component in the spell Raise Dead?). Various factions would hire and equip expeditions into the ancient (and monster infested) city to recover these bones. The party could very well be one of these expeditions. Extra-party rivalry, intrigue and conflict would be all part of the fun. Are there any agreed-to rules as to how these expeditions are to be conducted or is it a free-for-all? If there are rules, what are the penalties for cheating? What is the procedure for proving that someone did or did not cheat?

This, of course, is a beautiful set-up for a campaign. There is a built-in cultural reason that there are adventurers and that there is a megadungeon. There is also the added bonus of a built in time-frame in which a party needs to “level up” enough to be a contender in the adventure of several life-times. On this day one year from now, the competition begins. Will you and your party be ready?