I have been ill this week, therefore I have done a lot more TV watching than I normally do. Fortunately, in these days of streaming video, it means I can be a lot more selective about what I watch. One of the more surprising discoveries I have made this week is CW’s Arrow.

Back when I did read comic books on a regular basis, Green Arrow was one of my all-time favorite heroes and definitely my favorite second-tier hero (I even liked Green Arrow II, Conner Hawke). The image that cements Green Arrow in my mind as one of the coolest ever, though, is this: 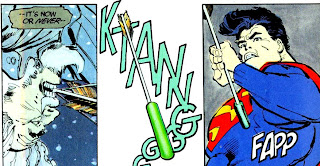 The sheer tenacity of the aged, one-armed Oliver Queen taking on Superman (and winning) in Frank Miller’s Dark Knight warms my heart. One of the reasons I tend to be a DC guy is that they play with the archetypal struggle of humanity vs. the superhuman. This is exemplified not only by the image above, but by the fact that Batman has a piece of green kryptonite in the Bat Cave just in case.

It is fine when the god-like superheroes of the DC universe serve humanity, but the moment they turn on humanity (either out of selfishness or allegiance to a different cause), guys like Batman and Green Arrow are ready and willing to take them on in defense of us regular joes. I love that.

From my own Christian POV, Batman and Green Arrow are akin to prophets — they are ever-vigilant against idol-worship (which is what superheroes would be doing if they stopped serving humanity — they'd worship themselves and their power rather than the God who created them) and they remind us of the fallenness of the world in which we live.

This all brings me back to CW’s Arrow, which is a TV adaptation of DCs Green Arrow, and it is a surprisingly good one. Not having paid much attention to comics in well over a decade, I don’t know how well the series meshes with current canon, but I really don’t much care. It is a refreshing re-telling of the Green Arrow story that gives enough nods to the mythos that I am very much satisfied with the effort thus far.

One of things that I am finding very intriguing is the honesty with which it deals with the consequences of being a vigilante. Unlike the classic Batman, this version of Oliver Queen has no qualms about killing people. Although he has done the calculations and figured that it is worth the price, there is definitely a toll that is being paid for all this darkness. While I completely understand why he has made the choices he has, I don’t agree with his choices. And yet, I care enough about him that I continue to watch.

Indeed, for my buck, this is one of the best TV adaptations of any comic book superhero I have ever seen. So, if you haven’t already, check it out.