Saintly Saturday: The Martyrs Arkepsimas, Joseph and Aethalas of Persia

Today, I would normally be inclined to wax poetic about St. Raphael of Brooklyn (since he is a recent and American Saint); however, since he is celebrated on the first Saturday of November, I did so last year. Having re-read that post in preparation for this one, I would add to it my own recent musings about WH40K and the ability to include the wandering Christian in any RPG setting.

Rather, I will write about another feast celebrated today: the Martyrs Arkepsimas, Joseph and Aethalas of Persia. During the 4th century, Christianity was flowering within the Persian Empire. The Church was building churches and appointing clergy even in the royal cities of Seleucia and Ctesiphon (both in modern day Iraq). Both the Magi of the native Zoroastrianism and the local Jews grew envious of this success. Therefore, they accused the bishop of these cities (St. Symeon) of espionage. This charge stuck because Christianity had become the state religion of Persia's great rival — the Roman Empire. Thus began a great persecution of Christians within the Persian Empire under Sapor II. 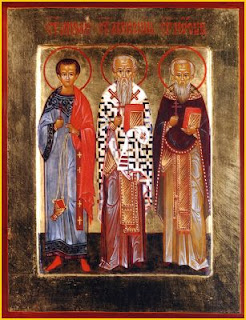 Sts. Arkepsimas, Joseph and Aethalas were all arrested during this time. Arkepsimas was Bishop of Naesson, Joseph was a presbyter and Aethalas was a deacon. They were taken to Arbela where they were put on trial by the Zoroastrian Magi Ardarkh. When they refused to denounce Christ, they were thrown in prison where they suffered for three years. At this point, the emperor himself came to worship at the temple in Arbela and demanded to see the three prisoners. When the three confessed their faith in Christ, Arkepsimas was beheaded and Joseph and Aethalas were stoned.

Interestingly, guards were set up so as to prevent the recovery of the bodies. Christians managed to recover Dn. Aethalas and secretly buried his body. At his grave, a tree began to grow bearing fruit with healing properties.

For me, the beginning of this story puts an interesting twist on the classic fantasy trope of Temple Street. Imagine, for a moment, rather than the classic RPG and S&S pseudo-pagan temples (such as those from the Greyhawk pantheon like Pholtus, Celestian, Fharlanghn, Boccob, etc),  a street with a Zoroastrian Temple, a Jewish Synagogue and a Christian Church. For me, this is a much more intriguing set-up than the normal trope.

In addition, this story suggests a spin on the traditional Rescue-the-Princess adventure trope. Imagine, for a moment, an urban campaign where one of the party’s primary functions is the recovery of bodies. This need not even be in an overtly Christian context. One could justify a whole campaign based on the idea that there are necromantic forces that have power over the bodies of those that are not properly buried. Thus, the recovery of a body means one less undead the city guard have to deal with.

Finally, here’s another twist, this time with the fantasy trope of the Elven Tree:

This very rare and highly valued tree only grows upon the grave of a martyred deacon. It remains green regardless of the season and its branches bear a variety of magical fruit. These fruits, when eaten, bestow upon the recipient a type of healing spell, depending on the color of the fruit. On any given day, a Deacon’s Tree will have the following fruit:

In addition, each fruit will have 1d4-1 seeds. These can be used to plant a new Deacon’s Tree or (more commonly) as a one-use +1 bonus to any die roll (after which the seed is destroyed).