Today is the Feast of St. Juvenal, who was originally a mining engineer in Russia; however, when his wife died in 1791, he became a monk at a monastery in St. Petersburg. After three years, he was sent to Alaska. Yes. Alaska. We tend to forget that the Russians discovered Alaska in 1741 and had a permanent settlement on Kodiak Island by 1784.

St. Juvenal was an enthusiastic missionary and was very successful with the Yupik, especially the Chugach. Due in large part to his work, to this day Alaska has a larger Orthodox Christian population per capita than any other state in the U.S.

In 1796 he was martyred near the mouth of the Kuskokwim by a hunting party. No one is certain why St. Juvenal was murdered, but the natives later told St. Innocent of Alaska that St. Juvenal did not defend himself nor did he try to run away. Rather, he begged his murderers to repent. After beating him severely, they left him for dead. He got up and started to follow them, again, begging them to repent. They beat him again, sure that they killed him. But again, St. Juvenal came to his feet and cried out to them to repent. This repeated itself several times. Finally, the hunting party hacked the saint into pieces. Thus, he became the first Orthodox martyr on American soil.

Years ago, I worked with a woman who grew up in Alaska. She wrote and drew an indie comic book that I once owned but have long since misplaced during all the moves I have made over the years. The story took place in a fantasy world inspired by the mythology of the Inuit peoples of Alaska that she grew up surrounded by. [For those of you who are interested, I cannot pull the name of the book out of my mind, nor did a Google search refresh my memory. Sorry.]

I remember thinking at the time, that Alaska is an untapped resource of inspiration for those of us who play FRPGs. Reading up on St. Juvenal only reinforced this idea. It has all the markers of a classic sandbox. There is a vast, unexplored wilderness at the edge of an empire. There is a type of Keep on the Borderland at Kodiak Island where adventurers go out and encounter natives both friendly and hostile while trying to make the wilderness safe for civilization.

To boot, Inuit mythology has just as many cool monsters to harass our stalwart adventures as anything in our hobby. For example: 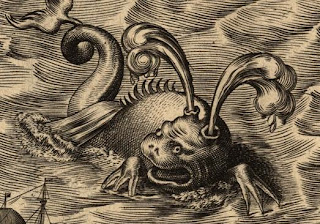 If that isn't enough to whet your appetite, check out this fantastic site.

Unfortunately, I do not have the time, nor the players to justify working on such a campaign at the moment, but this is definitely one of those pseudo-historical campaigns I've always wanted to do. For those so inclined, here are a couple of beautiful maps to get you started: 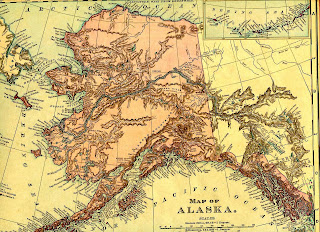 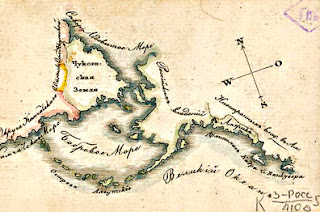