According to the Greek calendar, today is the feast of the prophet Ezekiel (other local Orthodox churches celebrate him on the 21st). Ezekiel was born of the tribe of Levi and was a priest during the reign of Jechoniah II, some six centuries before the birth of Christ. He was 25 years old when he, along with his king and many others, were captured by the Babylonian king Nebuchadnessar. He was living in captivity along the River Chebar when he was called by God to be a prophet. This call is famously recounted in the first chapter of the Book of Ezekiel.

This chapter properly belongs to the genre of apocalyptic literature. Though the word apocalypse has come to mean disaster or end of the world, its proper meaning is revelation. Thus, what Ezekiel is trying to put into words in the first chapter of the book that bears his name is his experience of encountering the living God.

Understood in context of Christ, Ezekiel's vision looks like this: 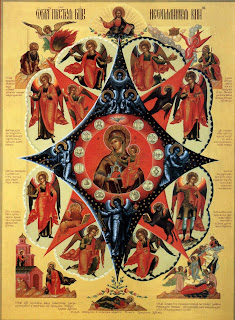 The throne is the Theotokos (the Virgin Mary). The man sitting upon the throne is the incarnate Christ. The living creatures are the four cherubim, where each one corresponds to one of the four Gospel accounts. The great wheels are the angelic host singing holy, holy, holy.

Having said (and accepted) this understanding of Ezekiel, I can't help but be inspired by this particular passage from the prophet:

I saw a wheel touching the ground beside each of the four-faced living creatures. The appearance and structure of the wheels were like glittering chrysolite. All four looked alike, and their appearance and structure were such that each wheel seemed to have another wheel inside it. In whichever of the four directions they moved, they did not need to turn as they moved. Their circumference was of awe-inspiring size, and the rims of all four sparkled all the way round. When the living creatures moved, the wheels moved beside them; and when the living creatures left the ground, the wheels too left the ground. — Ezekiel 1:15-19

Doing even a cursory web search of the words "Ezekiel Chapter 1" will reveal a cornucopia of theories about how this passage is really about UFOs. While I find it extremely entertaining that there are atheists who fail to see the irony that their acceptance of the existence of alien life requires a kind of faith similar to that held by those of us who believe in God, I can completely sympathize with the impulse to see this passage as a description of some kind of machine.

It represents in us a desire to comprehend the incomprehensible. If this image of God is a machine, then it is something we can touch, test, understand and ultimately master. Such a hope, however, is a fools errand. One of the reasons apocalyptic literature is so wildly fantastic is precisely because God is incomprehensible, ineffable and immeasurable. These images are an attempt to describe the indescribable — they are a literary technique to demonstrate the impossibility of trying to describe God in the first place.

This impossibility, though, doesn't stop them from trying. The reason we try is because we are made in the image and likeness of God. We are meant to strive to be like Him. Therefore, we imagine, we develop and we create. In part, this is why I play RPGs.

It is in this vein that I find the genre-bending madness of S&S, Expedition to the Barrier Peaks and Spelljammer to be natural and entirely acceptable. By juxtaposing the fantastic with the pseudo-scientific we create the same tantalizing nigh-knowability of the unknowable experience that Ezekiel had at the River Chebar.