In light of how many monsters Holmes includes in his Sample Dungeon that do not appear in his Monster section, I decided that I had better start making a few creatures for use in my version of the Chateau des Faussesflammes. For ease of use, I am using my modified version of the LL stat block.

If they say, "Come with us, let us lie in wait for blood; let us wantonly ambush the innocent; like Sheol let us swallow them alive and whole, like those who go down to the Pit…" my child, do not follow them in their way — Proverbs 1:11-12;15 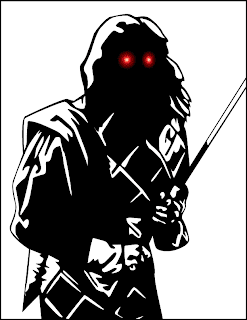 These vile creatures are sometimes mistaken for vampires, due to their habit of drinking the blood of their victims; however, they are merely the undead soldiers of the Black Queen. From a distance, they appear as normal fighting-men — dressed in armor bearing the Black Queen's heraldic crown and armed with a variety of weapons (the Two-Handed Sword is most common). From up close, however, their near featureless faces and blood red eyes can be seen beneath long locks of hair.

There is only one way to permanently kill a Merovingian Ghoul: cut short its hair. Otherwise, 2d6 turns after being reduced to 0hp, it will reanimate with full hp and then relentlessly hunt down and seek revenge against the one who delivered the felling blow. When on such a hunt, the burning hate within them results in supernatural strength. All attacks and damage are made at +2.

Although they need not make morale checks, when fighting in groups, they are known to retreat when one or more of them have been "killed," taking their "dead" with them so that they might hunt with supernatural strength once their comrades have reanimated.

As undead, they are unaffected by the spells charm person, sleep, or hold person.