Saintly Saturday: Icon of the Mother of God of Cyprus

The first Sunday of Great Lent in the Orthodox Church is called The Triumph of Orthodoxy. On this day, the Orthodox Church celebrates the restoration of the icons to the Churches after Iconoclasm. [For those interested, I have written about this in another Saintly Saturday post]. In the liturgical texts of the following week, according to the Greek textual tradition, there is a story about an icon of the Theotokos (the Virgin Mary) in Cyprus. The style of this icon depicts the Theotokos sitting on a thrown with the Christ child on her lap with angels on either side. Today marks one of the days that this icon is commemorated. 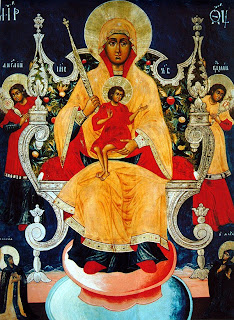 According to the Greek Synaxarion, this icon adorned the gates of a Church dedicated to the Theotokos. A certain Arab was passing by and he decided to demonstrate his disdain and hatred of Christianity. So, he shot an arrow into the icon. The arrow struck the Virgin's knee, which immediately began to bleed. Overcome by fear, the Arab tried to flee for his home, but dropped dead before he got there.

This is not a unique phenomenon. Bleeding icons can be found all over the world. In fact, I have seen one myself. It reinforces the theological understanding of icons — through the grace of the Holy Spirit, icons manifest the personal presence of Christ and His saints. 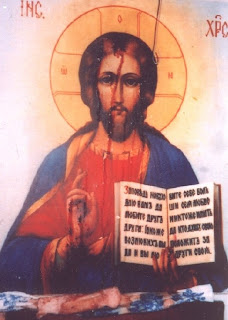 These rare objects were once normal religious icons — simply paint on wood — positioned by the faithful in a place where the saint depicted might be a guardian. Many were at one time on gates, doors or over some kind of entrance. The story usually unfolds that during an attack, one of the invaders strikes the icon with a weapon as if to attack the person depicted in the icon. It then starts to bleed and the invaders run away in fear.

A Bleeding Icon has the ability to affect one of the following types of monsters:

The character wielding the Bleeding Icon has the ability to Turn this type of monster as a cleric of the same level Turns Undead. A result of 'D' on the Turn table indicates that the target dies of fright.