One of the saints remembered today is St. Julia the Virginmartyr of Carthage. Born into a Christian family, she was captured by Persians when she was still a girl and sold into slavery. Though her master was a pagan, she served him faithfully and maintained her faith through fasting and prayer. No amount of cajoling by her master could convince her to turn away from Christ.

One day, her master set off to Gaul in order to sell his wares and took St. Julia along. He decided to stop off at the island of Corsica in order to take part in a pagan feast. When the locals found out that St. Julia stayed behind on the ship, they got her master drunk with wine. Once he and his companions were asleep, they stole St. Julia from the ship and crucified her when she refused to denounce Christ.

At her death, an angel appeared to the monks of a nearby monastery. They went, recovered her body and prepared it for a reliquary. Today her relics are at a woman's monastery in Breschia (Italy).

Since the island of Corsica is off the coast of France, I feel a little bit justified in some of the work I've done based on the story of St. Julia. I threw together a simple map based off of Corsica: 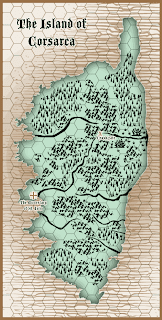 I've only keyed two things: the monastery and what I've called the "Crash Site." The island is mostly wilderness with very few inhabitants other than the monks. They recently observed a strange fire from the sky crash down upon their island. Since then, they have seen strange things. The river that they use for water has changed color several times. There are mysterious lights that appear from the mountains where the fire fell from the sky. Some of the hermits attached to the monastery have reported seeing strange white-haired ape-like creatures moving through the forest.

The monastery itself is named after a martyr saint. Her death was revealed to the monks by an angel. That angel has been known to reappear in times of tribulation to bring protection, healing and comfort. 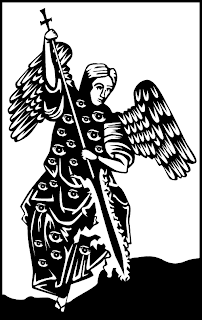 Here are a couple of inspirational photos that might be the basis for and island based monastery: 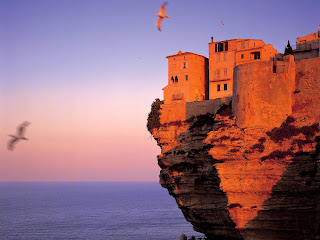 Although the one above is beautiful and can actually be found in Corsica, I think I prefer the simplicity and practicality of this fortified monastery: