Today is the Feast of The Righteous Simeon the God-Receiver. Simeon appears in the Gospel According to Luke when Mary and Joseph, according to the Law, appear at the Temple 40 days after the birth of Christ to present Him and the proper sacrifice (two turtledoves or two pigeons). Simeon sees them, takes the child into his arms and cries out:

Lord, now let Your servant depart in peace, according to Your word, for my eyes have seen Your salvation, which You have prepared before the face of all people, a light to enlighten the Gentiles, and the glory of Your people Israel!


In other words, Simeon is asking God to allow him to die just as God promised him. On its face, this seems like an odd thing to say. That is, however, until you read about his life. According to the tradition of the Orthodox Church, Simeon was around 360 years old when he met Christ at the Temple.

He was on of the Seventy Jewish Scholars that answered the call of Ptolemy II, Pharaoh of Egypt, to translate the Old Testament into Greek so that it could be included in the Great Library of Alexandria. Initially, the plan was for all seventy scholars to independently translate the Pentateuch (the first five books of the Old Testament) and then gather together to see what the differences were and argue from there. When they gathered together again, all seventy translations were identical. It was therefore accepted as a divinely inspired translation.

What eventually came out of that work is today called the Septuagint (coming from the word for “seventy”). When we read the New Testament (written in Greek) all of the quotes of the Old Testament come from the Septuagint. Interestingly, the Septuagint is the oldest version of the OT that we have. The Hebrew version of the OT we have today (called the Mesoretic Text) is itself a translation made by Jews who wished to get rid of all the Hellenic influence out of Judaism after the fall of Jerusalem in the 1st century A.D. It is considered a translation because the original Hebrew did not have vowels. Thus, it was possible to make several different readings out of the same passage by inserting different vowels. The earliest Mesoretic Text we have dates from the 9th century A.D. Today’s English OT translations are based on the Mesoretic, not the Septuagint which explains why there can be such variance in the quotations the NT makes of the OT.

Simeon was translating Isaiah when he came across Isaiah 7:14


Behold, a virgin shall conceive in the womb, and shall bring forth a Son

He didn’t think the word “virgin” should be used and went to change it, but an angel appeared before him and stayed his hand. He was told:


You shall see these words fulfilled. You shall not die until you behold Christ the Lord born of a pure and spotless Virgin.

Thus, Simeon lived in anticipation of being able to die for almost four centuries. 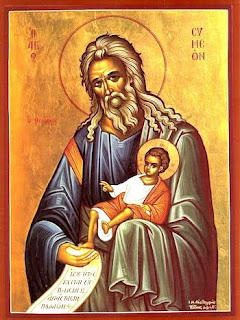 I am fascinated by this story because it subverts expectations. How many people throughout time have fantasized (and even sought) a way to cheat death? The whole vampire phenomenon is rooted in this primal desire. Yet, here is Simeon hoping to die and even asking God Himself to allow him to taste death.

It also reminds me of one of my absolute favorite characters in all of fantasy fiction: the Yellow King from Lawrence Watt-Evans’ The Seven Altars of Dusarra. In context of an RPG, he plays the role of patron. He is the one who sends the main character on his quests. What makes the Yellow King stand out, however, is that his goal is not money or power but rather, much like Simeon, he is an immortal looking for something that will kill him. 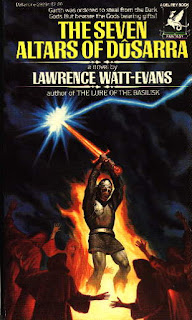 This, of course, is an awesome template for an NPC in any RPG, let alone a FRPG: the patron that pulls strings behind the scenes and helps out the PCs but whose real agenda is actually totally against all expectations.

As I have often repeated on this blog, one of the best things about RPGs is its ability to surprise. An NPC who appears to do one thing that narratively makes sense, but is actually doing something completely different is one of the most entertaining surprises we have available to us.