This year, in the Orthodox Church, an unusual occurrence happens. We get to celebrate The Great Martyr St. Theodore the Recruit (sometimes rendered “Soldier”) two Saturdays in a row. February 17th is the Feast of St. Theodore and we also always celebrate him on the first Saturday of Lent (of which I write about here) which falls on February 24th this year.

St. Theodore was a soldier in the Pontine district of Asia Minor (northeast Turkey along the Black Sea). When his commander ordered him to sacrifice to idols, he refused. The saint was given several days to reconsider, during which time he set fire to a temple dedicated to Cybele, “the mother of the gods.” For this he was tortured and sentence to burn to death. He boldly stepped into the fire, and though he gave up his sprint, his flesh was not burned. 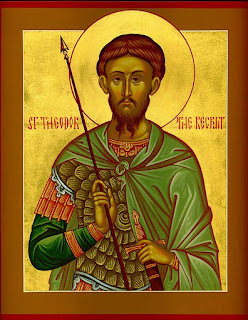 There is another St. Theodore who is also a Great Martyr and who also is a soldier. Thus, each is given a different moniker to differentiate the two. Today’s Theodore is called “the Recruit” and the other is called “the Commander” because of the different ranks they held as soldiers.

There is a bit of confusion, however, when it comes to the moniker “The Recruit.” In the Greek it is “Tyronos” which comes from the Latin “tiro” meaning “recruit.” In Greek, when one reads the Feast of the Day, the name of the saint of always in genitive — the 17th is the feast of  Theodore the Recruit. Therefore, the “the” in “the Recruit” is also in genitive. Since “tyronos” is Latin, not Greek, is sometimes mistakenly understood to be a place: St. Theodore ofTyronos. Of course, there is no such place (at least that I or Google Maps are aware of). There is, however, the city of Tyre in modern-day Lebanon. In the genitive is is rendered in Greek “Tyrou” — close enough that might the two might be conflated.

This is a reminder that names and language are important tools in our tool belt as RPGers, designers and players. It also puts a nice spin on a troptastic campaign idea:

There are plenty of examples of folks out there that have posited re-skinning the Lost Caverns of Tsojcanth, The Tomb of Horrors and other classic modules as the end-goal of a campaign-long quest (especially if the said dungeon holds within it a critical magic artifact that several different factions want to get their hands on).

Imagine if there existed a map or a legend or a song that was believed to be the key to finding said quest-ending dungeon. Here is where language becomes very important: as with St. Theodore’s moniker having multiple meanings depending upon grammar and language, this map/legend/song would have a different meaning depending upon which language thought to be its origin.

Thus, depending upon whether or not the party has access to Dwarfish, Elvish, Orcish, etc. the map/legend/song points in a very different direction.