Saintly Saturday: The Transfer of the Relics of St. John Chrysostom

Today is the Feast of the Translation of the Relics of St. John Chrysostom. Thirty years after St. John's death in exile, St. Proclus, Patriarch of Constantinople, persuaded the Emperor Theodosius II (A.D. 408-450) to allow the relics of St. John to return to Constantinople. The emperor’s mother, Empress Eudoxia, had sent St. John into exile because he, as the Patriarch of Constantinople, openly criticized her vices. Theodosius issued an edict for the return of St. John’s relics; however, those sent to retrieve could not lift his reliquary. It was not until the emperor wrote a letter of apology and humbly asked the saint to return that the reliquary was able to be moved.

The moniker “Chrysostom” means Golden-mouthed because St. John was a gifted homilist. Fortunately for us, St. John is one of the most well-documented saints in the history of the early Church. We have more of his writing than just about any other saint, including his analysis of the Gospels according to St. Matthew and St. John as well as the Letters of St. Paul.

There is a story of St. John from the time when he was writing on St. Paul that a man who had come to see the saint was turned away because St. John was seen to be meeting with someone at his writing desk who was leaning over and whispering into the saint’s ear. This went on for three days. When St. John openly wondered at what had happened to the man, who he had arranged to meet, those around him became aware of the icon of St. Paul hanging over St. John’s desk and realized that the person they saw whispering in St. John’s ear was St. Paul himself. To this day, that ear remains incorrupt (and I can attest to that because I have seen it myself). 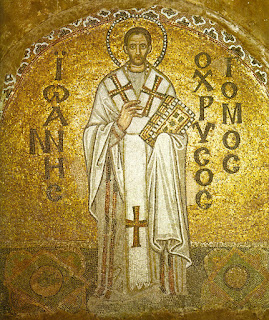 St. John looms very large in the life of the Orthodox Church, because the liturgy we do most of the year is attributed to St. John. Indeed, because of the large number of surviving writings by St. John, modern textual analysis confirms that the Anaphora of the Liturgy of St. John Chrysystom was indeed written by St. John himself. It is a rather humbling and awesome thing to pray his words knowing that 1600 years of Christians before me have prayed the very same thing.

It is a reminder that in our present age, we delusionally believe we have progressed beyond our forbears. While we may have some pretty amazing technology at our fingertips, human beings knew just as much (if not more) about being human hundreds and even thousands of years ago. St. John’s writing is as relevant today as it was in the 4th century. My daughter recently had to read Thucydides for school. I challenge anyone to read that with “United States” in the place of Athens and “Soviet Union” or “China” or “North Korea” in the place of Sparta and be able to tell me that (beyond the technology involved) that the conflict was any different.

We doom ourselves by ignoring the wisdom of those who came before.

In a way, this is why the OSR has been so important for this hobby. We refuse to ignore the past. Indeed, some of us insist that past versions of D&D are better than what came after. I count myself among them. I recently got back together again with some high school buddies of mine to play. Despite a lot of talk about how good 3.5 is and how we all should give 5e a go, we ended up going back to B/X because the wisdom there just cannot be ignored.

I pray we all apply this axiom beyond the gaming table. Pick up a classic and realize that humanity has always been human (both wise and foolish) and that we have a lot to learn from those who came before.