As I have stated in the past, I am not a huge fan of modern science fiction. That doesn’t mean I don’t hope that there might still appear on the horizon a good or even great modern sci-fi tale worth taking in. Thus, I occasionally dip my toe in the water to see if anybody comes close. Altered Carbon happens to be one of those tales that does get close.

For those who have not yet taken a look at the new Netflix sci-fi show, it is based on a 2002 novel by Richard K. Morgan about what might today be called a transhumanist culture where people’s consciousness is recorded into what are called “stacks” and inserted into different bodies. Originally intended to be a means of space exploration (transfer your consciousness to a body light years away without having to physically cross space), it ends up being used to create a man-made version of immortality. 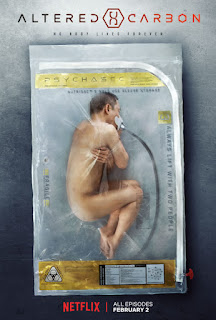 To its credit, Altered Carbon does a very good job of depicting what a world without God looks like: it is hedonistic, brutal and miserable even for those who hold all the wealth and power. It is the Marque de Sade writ large. It also acknowledges that Christianity (in this case the “Neo-Catholics”) would stand in opposition to the idea of stacking.

Unfortunately, like much of entertainment today, the mouthpieces for what passes for a theological discussion are cookie-cutter, inflexible, intolerant and have the rhetorical skills of a piece of cardboard. This show could have been great had it taken this aspect of the story more seriously, because it is a fascinating exploration of what is the soul, what does it mean to be human and where does God fit in to all of this.

To that end, I would like to present the case historical Christianity would actually make should such a technology ever be made available (and Note to Sci-Fi authors: the Church will survive all the philosophical crap thrown its way despite the existence or non-existence of aliens or fantastic technology so you don’t need to cheapen your stories by coming up with crap names like “Neo-Catholics”):

Christianity has long maintained that the body is an integral part of the human person, Christ became incarnate in order to save us, after all. Thus, from very early on, people have been asking the question where in the body does the soul reside, because one doesn’t want to go around getting manicures if the soul happens to reside in the fingernails.

St. Athanasius the Great actually tackled this question in a way that directly speaks to the story presented in Altered Carbon. He understood that the soul would not reside in a part of the body that the body could survive without. Thus, it is not in hair or the fingernails, or limbs or eyes or even things like the kidney or the frontal lobe of the brain. Human beings can survive without all of these things (maybe not well or for very long, but life would continue). He posited three areas of the body that life cannot do without:


This last observation is the most intriguing in terms of Altered Carbon because that is where the “stacks” are placed inside the body. Therefore, it could be argued that they contain a human soul based on the part of the body they function in. A conversation could be had about whether or not the whole soul was contained therein (having left behind both the heart and the arteries) but the Church has long been comfortable with organ transplants. The first recorded transplant was done by Sts. Cosmos and Damianos (a leg) some sixteen hundred years ago. 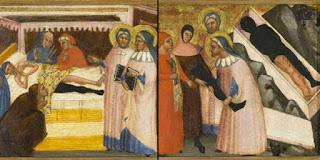 Due to the fact that a donor is preserving life, there has been no serious objections, even to heart transplants other than the admonition that the recipient is now responsible for not only their own soul, but for that of the person who saved their life.

Thus, from a practical and theological point of view the objections that the Neo-Catholics have for the “stacking” technology bear little resemblance to historic Christianity. That doesn’t mean the Church wouldn’t have objections to the society depicted in Altered Carbon and the way it uses stacks.

As I stated above, the human body is an integral part of the human person. Preserving one’s consciousness or even one’s soul does not mean that the human person is being preserved. More critically, however, is the use of clones by the uber-rich to emulate immortality and the treatment of human bodies in general (they are derogatorily called “sleeves” as if they are clothing rather than people).

Despite the fact that cloning technologies are popularly associated with science fiction, clones already exist among us: they are normal called identical twins, triplets, etc. I have been blessed to know several pairs of identical twins in my life. While it is almost spooky how similar twins are in their likes and dislikes, etc. there is no question that each one of them is a unique and unrepeatable human person. It would be considered unconscionable for the eldest twin to “own” their sibling because they came from the same genetic code or for one twin to harvest the organs of a living twin because those organs “belong” to them.

In other words, when we gain the ability to make clones of ourselves, each and every one of those clones will be a unique and unrepeatable human person in the same way identical twins are. To treat them as property to be used to emulate immortality would do so on the back of slaves. Actually, they would be worse than slaves, because even their basic humanity would be denied them. They are just “sleeves” that aren’t even allowed the freedom to consciously be forced to serve their masters.

At the core of the story told by Altered Carbon is the question: What does it mean to be human? Specifically, is death part of what makes us human? A society that has replaced God with demigods who fake their immortality through technology is depicted as vile, violent, stagnant and bored. It is even hypothesized that they have ceased to be human.

Had this show bothered to have more than a cardboard caricature of Christianity (and a fundamental misunderstanding of it to boot), this show could have plumbed the depths of the questions it asks in a far more interesting and, dare I say, entertaining way. It could even have been one of those great science fiction tales.