Today is the Feast Day of Auxentius of the Mountain. Born in Syria, he enlisted as a soldier in A.D. 442, during the reign of Theodosius the Younger. He served in the Fourth Military Company of the Scholarii, also known as the Imperial Guard. He saw enough vanity in the world of high politics that he retreated into monasticism. He became a hermit on Mt. Oxia (which came to be known as Mt. Auxentius). This mountain was near Chalcedon, a city across the Bosporus from Constantinople, in the Roman Province of Bithynia.
As often happens with holy hermits, he began to attract other monastics and he became an Archmandrite (literally, “chief of a sheephold”) of the community there. He was asked to speak at the Fourth Ecumenical Council at Chalcedon in A.D. 451, which dealt with monophysitism (the belief that Christ only had a divine nature). He became well-known as a healer.

Chalcedon, Bithynia and Mt. Oxia/Auxentius are all on the northern coast of modern-day Turkey, just east of the Sea of Mamara. Bithynia was actually its own Kingdom prior to voluntarily becoming a part of the Roman Republic. Its capital was Nicomedia, which was on the eastern coast of the Sea of Mamara.
If the name Mamara rings any bells, it is because I mentioned it in a post about the Nine Martyrs of Cyzicus. At the time, I drew a map that might serve for an interesting campaign. Here is an updated version of that map: 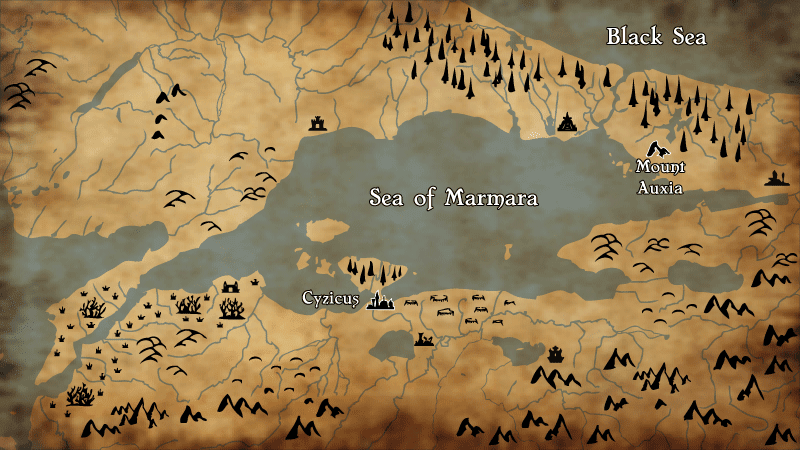 I added a stand-in for Nicomedia, which could be the capital of a kingdom whose influence reaches east off the map. In addition, I included a "Mt. Auxia," which could serve as another option for a megadungeon (we could always use another abandoned monastery). Alternatively, there could be an active monastery where PCs might find an oracle, or the guardian of a key piece of information and/or object. Given that St. Auxentius was a healer, PCs might go to the mountain seeking the only person in the region able to heal a particular ailment. This, in turn, might have the PCs going on a mission at the request of the monks on Mt. Auxia.

Regardless, this proto-campaign, based around the Sea of Mamara continues to grow.