When you spend enough time reading the Synaxarion, you run across entries about saints who have no name or saints about which we really only know scant information about and only because they are mentioned in passing by one or more ancient sources. Today is the Feast of St. Augulus and he is one of these saints.

We know him primarily because he is listed by St. Jerome as a martyr and a bishop from Britain. Most likely he was martyred in London. Time references (circa A.D. 300) suggest that he was killed during Diocletian’s persecution of Christians.

One might speculate as to why his story is not widely known. My own guess has to do with the remoteness of the Roman colony in Britain and the fact that a few centuries later it was overrun by pagan Goths when Rome abandoned their British territory. The fact that we still know of him is rather spectacular.

His story, what there is of it, does get me thinking about alignment, of all things. I have done a lot of posts on alignment, and no matter how I might pontificate about the matter, I always fall back on the three-alignment system found in 0e and B/X in actual practice.

While I could probably play sans any alignment rules, the Law-Neutrality-Chaos axis does provide for a useful — and very flexible — reference point. This is true not only for players, but for for me as well.

Let me illustrate my point with one of my all time favorite movie antagonists (note, I am specifically using that word because I would not call him a villain): 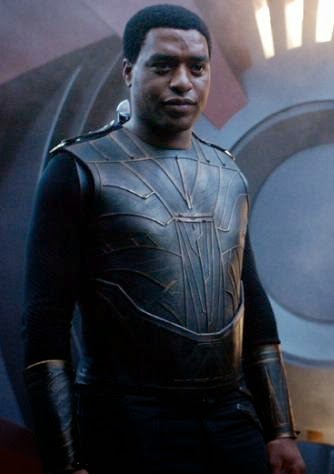 The Operative from the movie Serenity would seem to fit nicely in the Lawful Evil section of the nine-point alignment system. He even admits that what he actually does is quite monstrous; however, he does it so that no one else has to. He also endeavors to do it in the most honorable and merciful way possible. The reason being, his real interest is in the greater good. As he sees it, someone has to do his job so that all the good people of the world are free to go on being good. This clearly places him outside Lawful Evil as it is described in the AD&D PH:


life, beauty, truth, freedom and the like are held as valueless, or at least scorned. By adhering to stringent discipline, those of lawful evil alignment hope to impose their yoke upon the world.

as well as Lawful Neutral:


Those of this alignment view regulation as all-important, taking a middle road betwixt evil and good.

Thus, the nine-point alignment system cannot adequately describe the Operative and his philosophy of life. The three-point axis, on the other hand, can. As an agent working to protect Civilization, he is clearly Lawful.

In the same way, the soldiers who arrested and murdered St. Augulus during the reign of Diocletian were not agents of Chaos. They, too, could be described with the label Lawful.

The implication here is that the Civilization (Law) vs. Wilderness (Chaos) dichotomy need not be a black and white affair. Indeed, one could duplicate a purge in a D&D campaign similar to the one Diocletian was attempting. In his eyes, the Christians were traitors and posed a serious threat to the stability of the Empire. When such a persecution shows up on the borderlands where PCs normally go adventuring, this leaves them with a very interesting question:

What kind of Civilization are we making the Wilderness safe for?