Today is the feast of St. Irene. She was born Penelope to a noble in the Persian city of Magedon. Through her tutor Appellian, she was able to discern a divine vision which convinced her to become a Christian. As a Christian, she took on the name Irene (which means peace).

There are several miracle stories about her life as she travelled from place to place bringing thousands to Christ. My favorite is her first.

When her father found out that had become a Christian and refused to worship pagan gods, he had her tortured. Realizing that she would not turn from Christ, he had her bound and thrown beneath the hooves of horses to be trampled to death. Not only was she unharmed, but one of the horses reared up and killed her father. Through her faith and prayer, however, he was brought back to life and came to believe in Christ.

She died in Ephesus in the first half of the 4th century. Today, she is considered the patron of the Aegean island of Thera, which is more commonly known as Santorini, which is a corruption of the name Saint Irene. 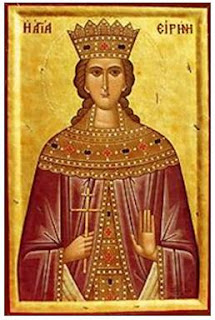 One of the things that I probably struggle with the most when making any campaign world are place names. I have found that good names can add a level of depth to a world and poor names can break the suspension of disbelief necessary for any sense of immersion.

Personally, I have a few tricks that I do use. Having a couple of polyglots in the family means I have access to a variety of different languages. I like to assign a specific language to a specific race. While this works very well, it is hard work and since my players often don’t know Greek, Romanian, Latin, German, Hungarian, etc. (all languages I have used in the past), the world doesn’t come alive for them in the same way it did for me when I first named all those places.

The life of St. Irene offers a simpler solution that is a bit more organic and reflects a reality that everyone is very familiar with. Place names like Santorini are scattered throughout the world. Here are just a few examples:


One of my favorite examples is the modern name for Constantinople — Istanbul. In its heyday, the capital city of the Christian Roman Empire was simply referred to as The City. Thus, when people who were traveling to the capital were asked where they were going, they would simply answer, “To the City.” In Greek, this sounds like eis tin poli. To the non-Greek speaker, this sounds like Istanbul by which it is known to this day.

The beauty of all of these names is that there is a story behind each of them — an implied history. Even if I have no idea who the general is after whom the town Fort Hamlen is named or the saint after whom Sangorum is named when I put the place on a map, there is an open invitation to create that history if a player ever asks. Indeed, such a story can lead to an adventure or three.

The real beauty of using such a naming convention, however, is when a place comes to be known for the exploits of a PC. Then, not only do you know the history of the place, you got to see it unfold at the gaming table.