Today is the feast of St. Epiphanius, Bishop of Cyprus. Born in Palestine in A.D. 310, he was the son of poor farmers. In his youth he accepted the Christian faith and eventually became a monk in Egypt. His faith and virtue became known far and wide and the people wanted him elected as bishop.

This portion of his life is akin to the story of Jonah. Rather than acquiesce to the people, he fled. Everywhere he went, the calls of the people to elect him bishop followed. Finally, his friend St. Hilarion advised him to go to Constantia (also known as Salamis) in Cyprus. Knowing that such a voyage would result in his ordination, Epiphanius boarded a ship to Gaza; however, contrary winds forced the boat to come to port in Constantia. At this point, the saint bent his will and became bishop.

He became a fervent defender of orthodoxy against the Arians. He was held in such high honor that even Arian emperors dared not move against him.

St. Epiphanius is probably most famous for his seminal work, the Panarion, which catalogues eighty different heresies. Though modern scholars question the accuracy of some of his entries, the Panarion is still an indispensable historical witness for the history of Christian dogma and the Church. 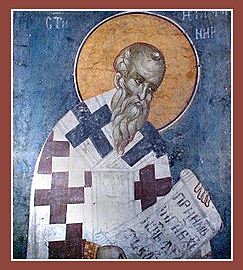 I suppose I could spend some time talking about how the life of St. Epiphanies and Jonah appear to justify a rail-roady style of game play. Personally, I would argue the opposite. In both cases, Epiphanius and Jonah were free to disobey and run away from their calling — they just had to live with the consequences. This is fundamentally different than a rail road, which (at best) makes the players feel as if they have choice when no matter what they do, they will always end up in the same place.

This does not interest me, however, as much as his efforts to catalogue all the various heresies of his day. At the risk of having commenters claim that alignment causes brain damage, I can’t help but see the parallel to alignment in D&D.

From an Orthodox POV, the Panarion is a necessary exercise. Dogma answers that vital question, “Who is God?” Different answers have different consequences in behavior, ethics, institutional structure and a whole slew of other ways faith gets expressed. Thus, if one is interested in maintaining a particular faith experience, one must insist upon answering the question “Who is God?” in the same way from generation to generation.

The Panarion mirrors alignment in D&D because it is an attempt to categorize different kinds of behavior and ethical systems for use in game play. This is particularly true of the nine-point alignment system of AD&D — a system that has always raised my hackles. Ironically, the Panarion is a good way for me to explain why.

Although I have spilled a lot of digital ink over the past several years meditating upon alignment on this blog, in practice I have come to the conclusion that the three-point alignment system of OD&D and B/X is the most practical and the one that allows the most freedom for both referees and players. Though the AD&D alignment system appears to grant three times as much choice, it is actually extremely limiting. The Panarion demonstrates why.

If one considers that Christianity in all its various forms (both orthodox and heterodox) to fall under Lawful or Good alignments, then St. Epiphanius demonstrates that it is necessary to create at least eighty different categories within this narrow spectrum of the alignment system, since each of the different heresies brings with it a different (if similar) ethical outlook.

Whereas the three-point system is general enough to allow for this variation all under the umbrella of Lawful, the nine-point system of AD&D does not. Indeed, Lawful Good, Lawful Neutral and Lawful Evil are all so narrow as to completely ignore a vast amount of Lawful human behavior. Personally, this is one of the reasons why I think alignment has historically been one of the most controversial aspects of the game.

For better or worse, however, I will always find the tension between the need for practicality one one hand (the three-point alignment system) and the need for an expansive explanation of ethical behavior on the other (the Panarion) to be fascinating. Therefore I seriously doubt this will be the last time I touch on the subject...