Today is the Feast of St. Augustine of Canterbury. An Italian Benedictine monk, he was sent to Britain at the request of Bertha, the wife of King Ethelbert of Kent. Though pagan, the king had married into the Merovingian line of Frankish kings, which by this time had become Christian. She wanted to restore a church built during the Roman era of Britain at Canterbury and dedicate it to St. Martin of Tours.

The request was granted by the bishop of Rome, St. Gregory the Dialogist (who we Orthodox credit with the Liturgy of the Presanctified Gifts and who also, inspired by the chant he encountered in Constantinople, was the creator of Gregorian Chant). St. Augustine arrived at Kent in 597.

Despite his pagan beliefs, Ethelbert was very cooperative with St. Augustine. The church was restored and the Christian Gospel was preached throughout the kingdom. Eventually, through his relationship with Augustine, Ethelbert became a Christian himself (and is today recognized as a right-believing saint celebrated on Feb. 25).

According to St. Bede, Augustine was consecrated as Archbishop of Canterbury, built Christ Church (the predecessor of the present cathedral at Canterbury) and the monastery of Sts. Peter and Paul (now known as St. Augustine’s Abbey which eventually fell prey to the dissolution of King Henry VIII).

St. Augustine was not entirely successful in his mission to Britain, however. Celtic Christians from Ireland had also been sending missionaries into Britain from the north (most notably from their outpost at Lindisfarne). St. Augustine came into conflict with these Celtic Christians over local customs (primarily over the date of Easter and monastic tonsure). While Augustine championed the customs of Rome, the Celtic Christians did not want to abandon their own. When he met with some of their bishops to seek unity in 603, the Celtic bishops had been instructed by a hermit to act based upon how Augustine greeted them. If he remained seated, he was to be rejected as arrogant and an unfit leader. St. Augustine remained seated. He would die two years later and it wasn’t until the Synod of Whitby in 664 that this conflict was settled in favor of the Roman customs. 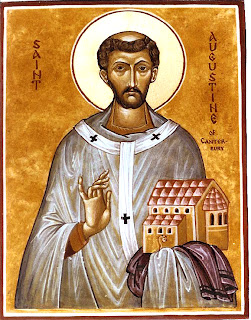 You will excuse me if I find this whole story incredibly inspiring: Pagan kings, Christian missionaries, native Christians vs. imperial Christians and ancient ruins being explored and restored. What more could I want for the basis of a D&D campaign? I could even import some of the stuff I’ve done for my version of Averoigne.

I even see a way to insert some Gygaxian goodness into all of this by re-skinning one of my all-time favorite modules — T1 The Village of Hommlet: