Over the weekend, Library Bob, a fellow Orthodox Christian and gamer dropped me a comment on an older post of mine ostensibly about Traveller. He writes his own blog that occasionally touches upon his own Traveller game and was interested in tying his Orthodox musings to his Traveller musings.

I found the idea intriguing enough that a bit of Gamer ADD has had me thinking about how I would run a Traveller game and the themes I might bring to the table. Let me begin by noting that a really good starting point for this discussion is the tragically cancelled Firefly (created by Joss Whedon, the genius behind the success of the Avengers) and one of the greatest sci-fi TV shows of all time. 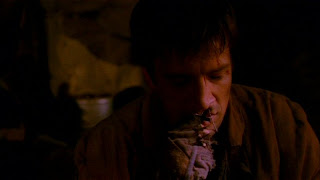 The reason being, Firefly plays with Christian themes and has Christian characters — including the main character Mal (despite his protestations to the contrary). In other words, sci-fi, Christianity and Christian themes are not only complementary, but can create some really great stuff.

So, here is a short list of themes and ideas that I would use as the basis of a Traveller campaign.

I have spoken on this blog a lot about the dynamic between the Chaotic/Demonic Wilderness vs. Lawful/Christian Civilization in D&D. This theme can easily be modified to fit into a sci-fi setting. In the history of the Orthodox Church, the Wilderness is normally associated with the desert — a stand-in for the Land of Nod where demons reside. It is the place where monasticism flourishes — where Christians of all ages have taken the offensive in the spiritual war against the devil and his minions.

In a world where entire planets are civilized and even terraformed, the new desert will be outer space. The Wilderness will be unexplored planets in the outer darkness. I have long wanted to include a monastery inside a giant asteroid in an asteroid belt in a sci-fi campaign, for example.

The key for this to work, however, is having some kind of demon. In D&D the are a plethora of monsters. Curiously, Traveller has always been human-centric even when it comes to its aliens (more on that in a bit) so this requires a bit of imagination. Firefly, though, has a great bit of inspiration — the Reavers.

If one is willing to deviate from canon and if used properly, the Zhodani could also play this role quite well.

One of the reasons I love the Third Imperium as a sci-fi setting is that it confronts the reality that the greatest alien is us. The idea that when humans finally make first contact, they come face to face with themselves is genius.

It forces us, as players, to confront the question what makes a human human? Is it culture? Is it genetics? Is it the ability to create a Jump Drive? The fun part of asking this question (from a gaming perspective) is that if one limits that answer to any sort of category (and there are plenty of those available to one playing in the Third Imperium), it opens the flood gates of conflict.

Historically, any time we take one aspect of the totality of what it means to be human and elevate it above ever other aspect, it always ends badly. Nationalism, fascism, communism, slavery and racism are all examples of this. Playing aspects against each other is a great way to generate adventures and even entire campaigns.

Having the Solomani Confederation as a central part of a campaign is a great way to play with this theme. I have always been fascinated by the cultural conflict within Solomani space between its fierce independence, its racial pride and its totalitarian impulses through the ubiquity of the Solomani Party.

Adding non-human aliens to the mix just makes the question more complicated. What is their place in God’s plan of salvation? How does Christ’s humanity speak to these alien species? Does his taking on human nature exclude them — again what is humanity?

This is closely related to the question What is Humanity? due to the nature of Christ, who is both God and Man. In a setting that has an ancient alien race that toys with genetics and seeds worlds throughout the galaxy with humans and elevated animal species, one is tempted to doubt that there is a God who created all things.

This doubt is a fantastic source for campaign ideas. There will be NPCs, planets and entire regions of space that will deny the existence of God. This denial leads people to try to replace God with themselves. As it has throughout human history, this course of action results in disaster of one kind or another. For example, take a look at the death toll of Communism and Fascism in the 20th century.

Firefly plays with this theme with its conflict between the inner and outer worlds. When, as is revealed by the movie Serenity, the inner worlds try to play God, bad things happen.

The Solomani Party has much in common with the Communists and Fascists. Therefore, they are a great way to play with this theme. If one has the Zhodani using psionics has an excuse to replace God with themselves, this can add a level of depth to both the psionic suppression and the Frontier Wars.

One of the best ways to run a Traveller campaign is via Patrons — the folks who hire the players to do their dirty work. This, frankly, is one of the best ways to introduce Christian elements into the game. Patrons can be Christians (like those monks who live inside an asteroid). Or they can be those who work against Christians (like a politician who wants to prevent an important Christian relic from reaching a region/planet that the politician is having a hard time controlling/wants to take control of and sees the relic as key to his/her goal).