Slave Pits: Map of the Temple

Here is the last map for my re-imagining of the Slave Pits: 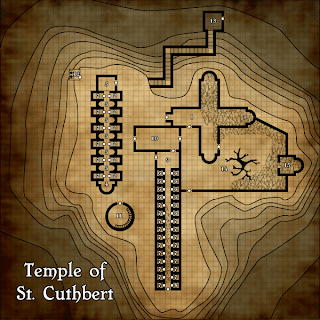 Notes: Much of the eastern wall, the temple itself and the monastic cells were destroyed when the followers of St. Cuthbert were slaughtered; however, the building with guest rooms was spared much of the destruction. The tower is new construction.

The half-breeds/sea blood who guard the Temple do so specifically to obfuscate the entrance to the Slave Pits. Like the villagers of Hinsmount, they will be unwelcoming of strangers and insist that the Temple is under repair and not safe for visitors.